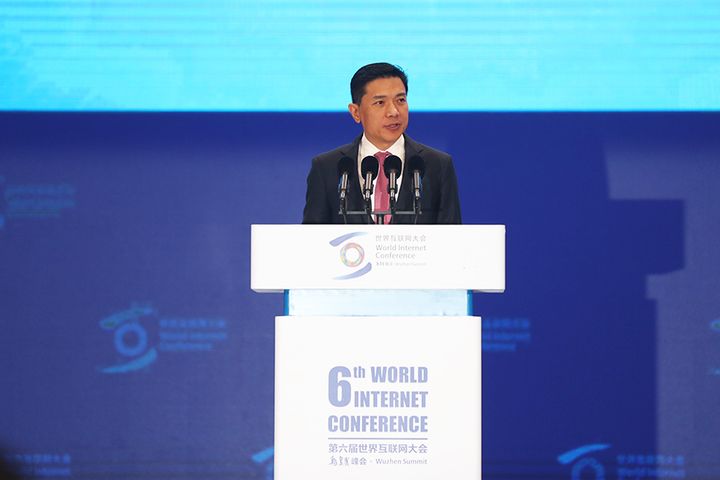 (Yicai Global) Oct. 21 -- The Sixth World Internet Conference opened in Wuzhen, Zhejiang province, yesterday, with some of China's best-known company executives revealing their thoughts on the development of internet-based sectors.

Below are some of the highlights from their speeches.

Li believes that people will become less dependent on their smartphones over the next 20 years as artificial intelligence becomes a core driving force in the digital economy and adds vitality to the global economy.

"Over the past 20 years we could say people's reliance on mobile phones has grown, but this will decline over the next two decades," he said, adding that there will be a broader variety of smart terminals available as the intelligent economy develops, such as speakers and wearables.

The application of technology and types of services available will also change, he added, saying people will communicate with tools in a more natural way.

Xiaomi plans to unveil 10 new low- to mid-end 5G handsets next year amid fear that their 4G predecessors will lose popularity, Lei said.

"I'm particularly worried about 4G mobile phones not selling well next year and want operators to speed up with the deployment of 5G networks," he added.

The digital age is forming a new model of development based on cooperation, Zhang said.

"Traditional competition is a zero-sum game, while competition in the digital age is evolving toward a net gain and net loss game, mutually beneficial development and incremental growth," he added, saying Alibaba will continue to serve small- to mediums-sized enterprises and provide them with an environment suited to their growth.

"We are rapidly approaching human standards in fields of AI research including voice, vision, language, reading and translation." Shum said, adding that Microsoft is trying to support and improve the global environment and the livelihood of those with disabilities by expanding applications of cloud computing and AI technology.

Yang believes that the industrial internet should develop horizontally and companies should seek commonalities across other sectors while also looking to expand vertically.

Corporate digitization and the consumer internet are very useful in the development of the digital economy, he added, saying the future will be all about informatization and intelligence.

The future of the digital economy will center around three key areas: upstream technology, globalization and an upgrade in information consumption, Ding said.

Competition will shift from the demographic dividend to technology, he continued, saying AI-based firms will become the new mainstream and integrate with all walks of life. Companies that dare to invest in core areas like education, healthcare, manufacturing and agriculture will enjoy the best opportunities, he added