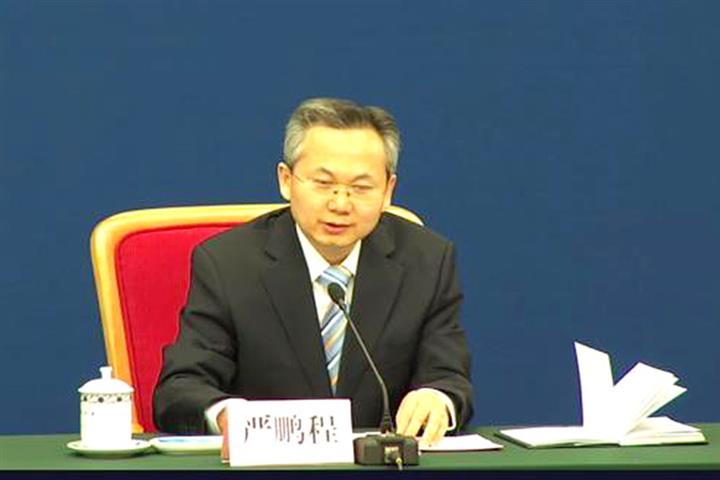 (Yicai Global) April 20 -- The coronavirus pandemic has not changed the long-term positive fundamentals of China’s economy, nor will it, according to an official at the country’s top economic planning agency.

China is seeing an orderly recovery in economic activity and various indicators have gradually improved since last month, Yan Pengcheng, director of the National Development and Reform Commission’s national economy department, told a press conference today. He also said that the consumer price index will continue to fall.

China's gross domestic product fell 6.8 percent in the first quarter from a year earlier, the National Bureau of Statistics said on April 17. It was the first quarterly contraction since the country adopted GDP as an economic indicator in 1992.

The home market is playing a strong supporting role in the economy, and businesses such as medical equipment makers, distance learning providers, telecommuting and telemedicine firms, have developed rapidly, Yan said. Some well-known international firms are also speeding up talks to set up regional headquarters in China, he added. All this shows the potential of the Chinese economy.

Yan noted that governments at all levels in China have introduced a series of policies and measures to combat the epidemic, help companies, stabilize employment, and expand domestic demand.

In promoting consumer spending, he said that the focus will be on actively stabilizing traditional large ticket buys such as cars and home appliances and boosting public consumption, while promoting the growth of online purchases in response to the general trend of household consumption upgrades and emerging demand during the epidemic.

As for expanding effective investment, China will invest in infrastructure, promote the transformation and upgrade of traditional industries, expand investment in strategic emerging industries, and accelerate the development of public health prevention and control and emergency medical treatment capacities.

In addition, China will accelerate the deployment of its fifth-generation mobile network, promote the optimization and upgrading of optical fiber broadband networks, and accelerate the construction of a national integrated Big Data center, Wu Hao, director of the NDRC’s high-tech industry department, said at the press conference.

Regarding expectations that the CPI will steadily fall, Yan pointed out that since the government launched subsidies for large-scale hog breeding and pushed to boost the import of pork and other meat products, pork prices have begun to fall from a high level over the past two months. Retail prices of pork in major large- and medium-sized city supermarkets and farmers’ markets fell 12 percent in mid-April from mid-February.

China’s CPI rose 4.3 percent in March from a year earlier, narrowing a 0.9 percentage point decline from the previous month and down 1.2 percent from February, the largest month-on-month decline in more than a decade, Yan said.

The African swine fever outbreak led to soaring pork retail prices in China in the second half of last year, more than double those of 2018. It was the main driver that pushed the CPI over 5 percent during the period.