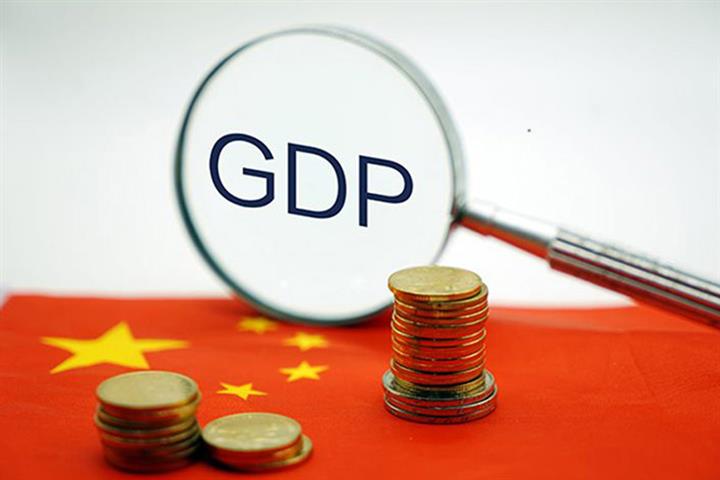 (Yicai Global) Oct. 15 -- In the coming days, China’s National Bureau of Statistics (NBS) will release its GDP data for the third quarter. These numbers will be closely watched, as they will give us a clear sense of how quickly the economy is returning to normal.

Expectations are high. Speaking to the August data released last month, NBS spokesperson Fu Linghui said that if the economy can maintain its momentum in September, GDP should show an “evident acceleration” in the third quarter.

For an indication of just how fast the economy might grow, we turn to the Yicai Research Institute’s Chief Economists Survey. The Institute regularly surveys about two dozen prominent economists from banks, brokerages and other institutions. At the end of each quarter, it asks them to forecast GDP, along with a number of other economic variables.

The Institute receives the forecasts early in the month that GDP is released, about a week before the NBS reveals the actual data. The forecasters have full information about what happened in the first two months of the quarter. But, their responses have to be submitted before they get much official information about the quarter’s final month. Typically, all they know before they submit their forecasts are the Purchasing Managers Indices (PMIs).

Even though they are only operating with partial information, the Chief Economists’ median forecast has proven to be pretty accurate. Table 1 below shows the median forecast’s performance over the last four quarters – a period over which GDP was extremely volatile. The median forecast’s ability to pick up the scope of GDP’s decline in Q1 and its rebound in Q2 is really very impressive. 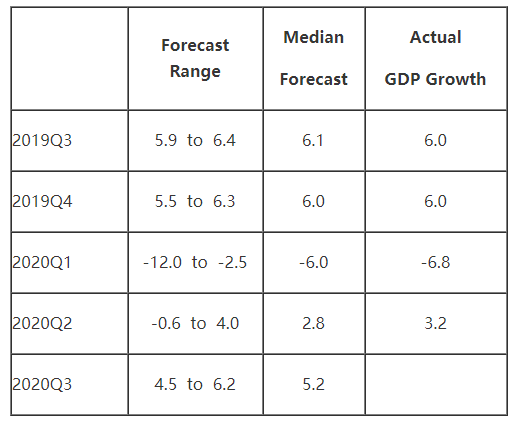 As Table 1 shows, the median forecast for Q3 is 5.2 percent. If it comes to pass, it would, indeed, represent an “evident acceleration” of GDP from the 3.2 recorded in Q2.

Table 1 also shows that there is still quite a lot of uncertainty about just how fast GDP will grow. The range of forecast is 4.5 to 6.2 percent, a spread of 1.7 percentage points. While this measure of uncertainty has fallen over the year, as the economy has stabilized, it remains more than three times as large as it was a year ago.

There are a couple of factors that suggest that the median forecast may be a bit optimistic.

First, the monthly profile consistent with 5.2 percent growth implies a very strong outturn in September. Figure 1 presents the year-over-year growth rates of the NBS’s Service Production and Industrial Value Added series for July and August. It also shows our Monthly Indicator, which is simply a weighted average of these data and is designed to be a monthly GDP proxy. We provide estimates for September which are consistent with the Monthly Indicator averaging 5.2 percent for the quarter.

For the median forecast to be realized, it is likely that the Monthly Indicator would have to accelerate sharply – to 6.1 percent in September from 5.1 percent in August. While the Monthly Indicator did accelerate by 2.1 percentage points from April to May, the monthly increments have been smaller – 0.6 percentage points – over the last three months, as the economy stabilized. 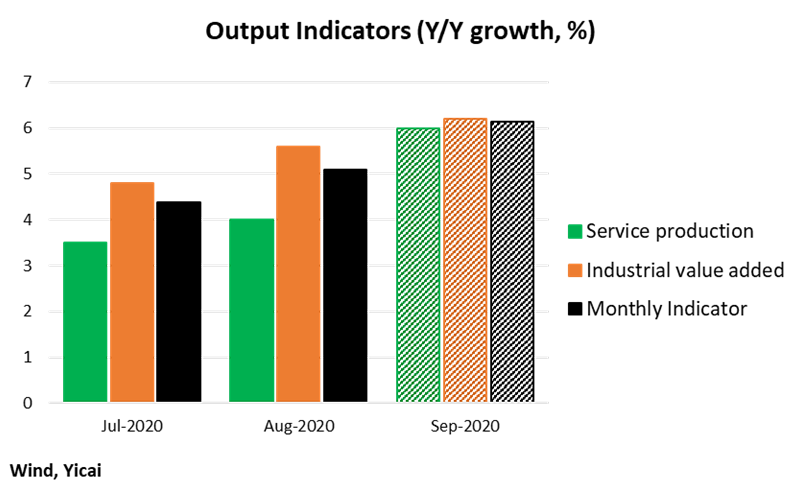 Figure 2 shows that the YHEI slowed in September. It averaged 4.2, down from 5.5 in August. The YHEI is calibrated to match year-over-year GDP growth. September's weakness was widespread. It came from more sluggish coal transport (a proxy for electricity generation), real estate sales and freight cost growth, as well as increased Baidu searches for the term “bankruptcy” (破产). The YHEI averaged 4.6 for the quarter as a whole, implying somewhat slower growth than the median Chief Economists’ forecast. 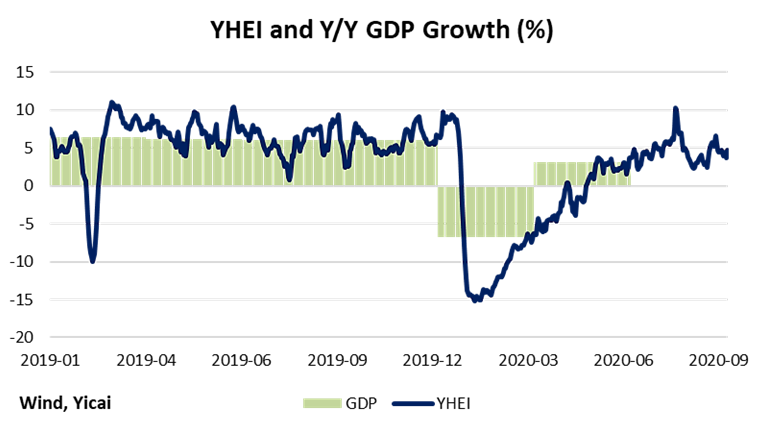 The little official September data we have so far – the PMIs, exports and imports – have been strong, but perhaps not strong enough to warrant the rebound implied by the Chief Economists’ median forecast.

It is hard to quibble with the collective wisdom of the Chief Economists. Still, I think it is only prudent to call for a more gradual recovery in September, with GDP growth for the quarter coming in at 5 percent.

In my view, 5 percent growth in Q3 would still qualify as “evident acceleration”. Moreover, it would signal that the economy had largely returned to normal. The output gap – the difference between the amount the economy actually produced and the amount it was capable of producing – would fall to only 0.9 percent. I estimate that it had exceeded 12 percent in the first quarter.

We will find out shortly if my forecast is more accurate than those of the Chief Economists. I hope I don’t have to buy all of them lunch if I'm wrong …

Mark KrugerMark Kruger is Yicai Global's Opinion Editor and Senior fellow to the Yicai Research Institute. He is also a Senior Fellow at both the University of Alberta's China Institute and the Centre for International Governance Innovation. Mark was formerly a Senior Policy Director in the Bank of Canada's International Department, a Senior Advisor to the Canadian Executive Director at the International Monetary Fund and head of the Economic and Financial Section in the Canadian Embassy in Beijing.
Recovery Continues Despite Consumers' Caution How Fast Did China’s GDP Grow in the Third Quarter? Mooncake Madness