How Sustainable is China’s Debt? 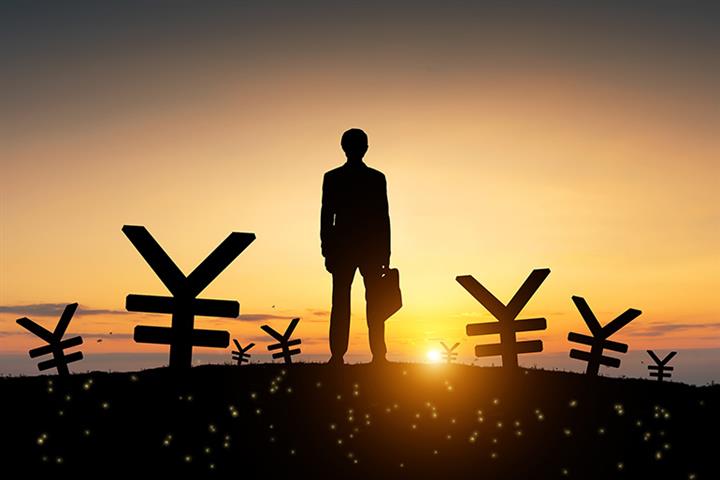 How Sustainable is China’s Debt?

(Yicai Global) Jan. 7 -- To escape the middle income trap and become a moderately developed country in the next 15 years, China has to successfully manage a number of risks. Most economists would agree that foremost among these is China’s rising indebtedness.

High macroeconomic leverage – the financing of economic development via the accumulation of large amounts of debt – is risky. While an economy can have good years and bad years, debts are supposed to be paid in full and on time. When debts cannot be paid, crises occur.

Economists have not been able to determine specific thresholds above which a country’s debt becomes unsustainable. But it is fair to say that a country’s debt is sustainable if it can be serviced under a wide range of adverse scenarios. So, in addition to the size of the debt, its currency composition, its maturity profile and the composition of the country’s creditors are all important factors.

The evolution of China’s non-financial sector debt, as a percent of GDP, is depicted in Figure 1. China’s corporate sector has accounted for most of the country’s borrowing, about 60 percent of the total as of September last year. Households accounted for 23 percent and governments for the remaining 17 percent. 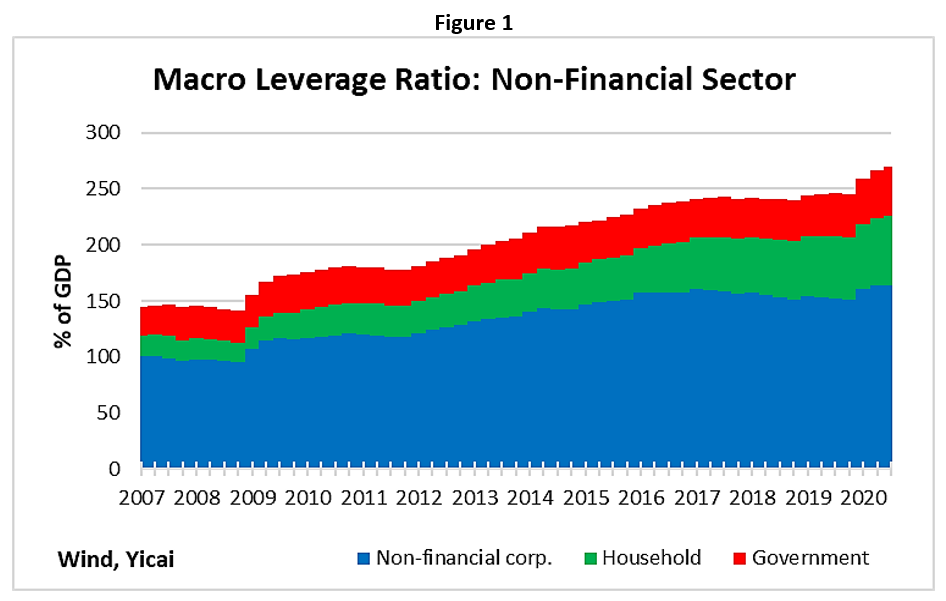 China’s indebtedness as undergone three distinct phases since the outbreak of the global financial crisis in 2008 (Table 1). Between December 2007 and December 2015, it rose by more than 80 percent of GDP. About two-thirds of this debt was accumulated by corporations. Initially, most of these liabilities were incurred as part of the government’s CNY 4 trillion spending plan, which was designed to counter the depressive effects of the financial crisis. In subsequent years, a wider variety of firms were able to access credit, as China’s shadow banking system grew in importance.

By the end of 2015, concern about the rise in leverage and the opacity of the shadow banking system’s exposures led the authorities to pursue a policy of deleveraging. By 2017, addressing financial risks became a key priority ­— one of the “three tough battles”— along with alleviating poverty and tackling pollution.

Between December 2015 and December 2019, the debt of the non-financial corporate sector was essentially unchanged as a percent of GDP. Households accounted for almost all the increase in indebtedness in this period. Most of this was in the form of new mortgages.

The outbreak of the pandemic ushered in a third phase of indebtedness. Between December 2019 and September 2020, China’s debt rose by close to 25 percent of GDP, as the country fought to maintain employment and output in the face of an unprecedented shock. The rise in indebtedness in these nine months was significantly larger than over the previous four years and about 20 percent of all the increase since 2007.

How does China’s indebtedness compare to that of other countries?

Data from the BIS allow us to situate China’s indebtedness with respect to those of the other G20 countries as at June 2020 (Figure 2).  China ranks as the sixth most indebted G20 country, between the US and Italy.

While China’s indebtedness is not “off of the charts” with respect to its G20 peers, it is high for a large, middle-income country. Indeed, as a percent of GDP, credit to the non-financial sector in China is about double the average of the other middle-income G20 countries.

Does that mean that China is too poor to be this levered?

Not necessarily. Compared to the other middle-income G20 countries, China has a larger and more diversified industrial base, which makes it more resilient to shocks. Moreover, many of those countries suffer from “original sin”. Because of a history of unsustainable borrowing and high inflation, they find it difficult to borrow in their own currency. In contrast, almost all of China’s debt is denominated in renminbi and it is largely held domestically. These factors are also positive for China’s debt sustainability. 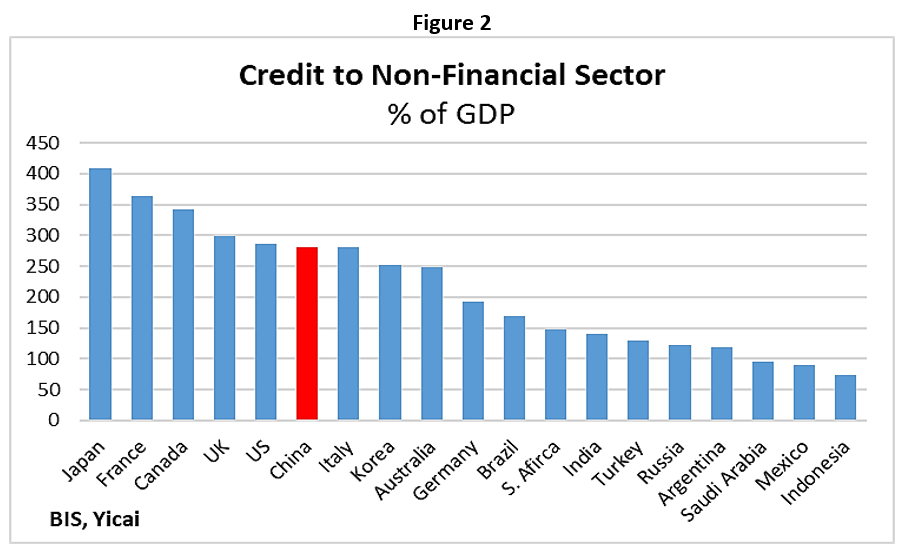 Another way to think through debt sustainability is to look at the type of activity being financed. If a country borrows to improve its productive capacity, the increase in leverage is more likely to be sustainable than if debt is being accumulated to pay for consumption.

Capital goods are typically very expensive and need to be paid for over a number of years. It is not surprising to find that the increase in the leverage of China’s non-financial sector tracks that of its capital stock, with both increasing rapidly since 2008 (Figure 3). 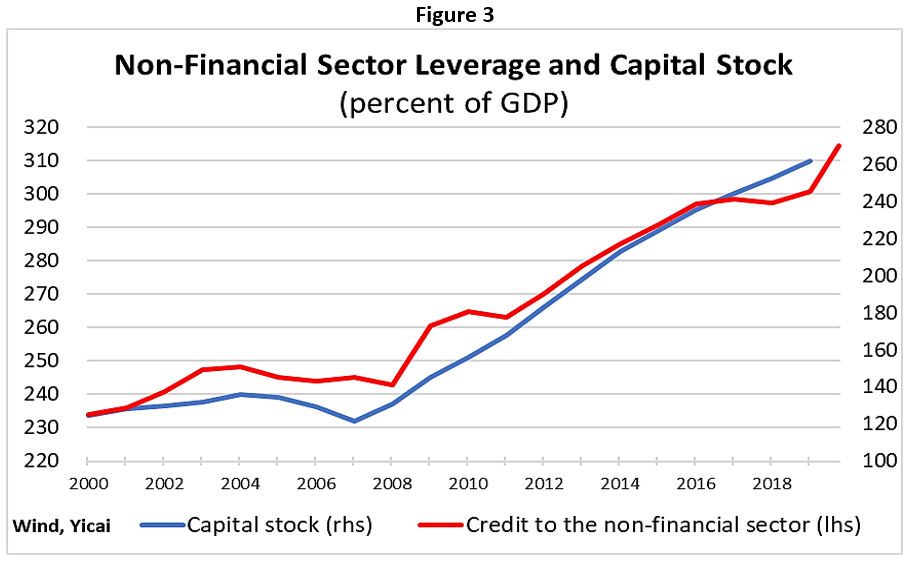 For debt to be sustainable, it is not sufficient that capital goods be financed. The investment has to be productive enough to service the debt. In a country as big as China, one will certainly be able to find white elephant projects. Indeed, we have observed pockets of over-capacity in certain industries such as steel and solar panels and in certain regions, like Ordos, Inner Mongolia (which is actually no longer a ghost town). However, these are examples of micro-economic imbalances. The macro-economic data tell a very different story.

To assess the productivity of Chinese investment, we look at the marginal product of capital. This is the extra bit of GDP that you get from that last bit of investment. Figure 4 shows that China’s marginal product of capital has fallen from extremely high rates in the early 2000s. Nevertheless, at close to 15 percent, it remains superior to those of advanced countries and other emerging market and developing countries (EMDCs). This suggests that, from a macroeconomic perspective, Chinese investment continues to be relatively productive. 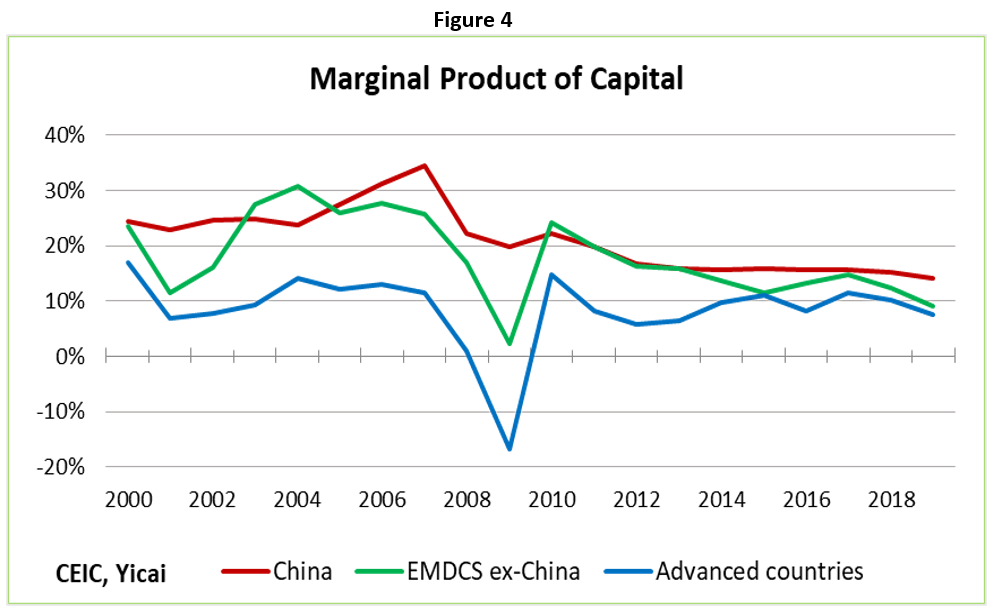 Ensuring that investment remains productive is one important way to increase the sustainability of China’s debt. Other policies can also be helpful here.

China’s non-financial corporations should be encouraged to finance themselves without incurring debt, for example via the equity market. The development of Shanghai’s STAR market, which offers firms a quicker path to IPO, is a model that could be pursued more aggressively.

Chinese households are becoming more levered because of the high cost of housing and incentives to own rather than rent. It is encouraging that the recent Central Economic Work Conference called for promoting the construction of affordable rental properties and improving long-term rental policies, as this should relieve households of the need to become “mortgage slaves”.

All of the increase in government indebtedness since 2007 was incurred at the local level. This is because local governments often lack the power to raise taxes and sustainably fund their expenditures. Indeed, as Figure 5 shows, China’s general government revenue, as a percent of GDP, is lower than in most other G20 countries. A recurrent tax on residential property would not only boost local government revenues and reduce their borrowing needs, it would also dampen the speculative demand for apartments and improve housing affordability. 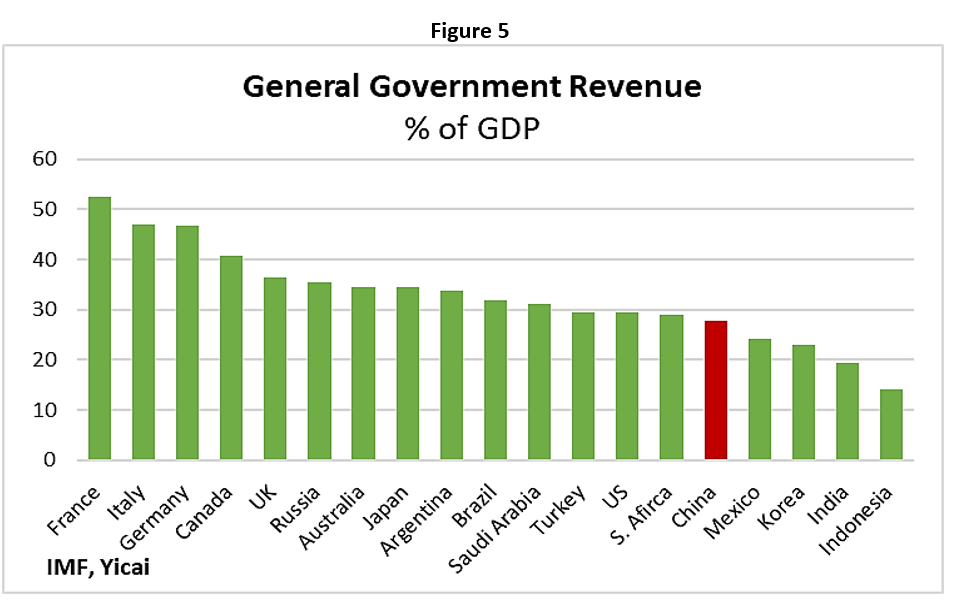 China’s explicit government debt is low, compared to that of other G20 countries. However, off the books liabilities loom at both the local and central government levels.

Due to limits on their borrowing, local governments have set up investment financing vehicles, which are designed to help raise capital for infrastructure projects. If the projects fail, these “firms” liabilities could end up on the local governments’ books. Such contingent liabilities are not small – in its 2019 Article IV report, the IMF estimated that they could be in the neighbourhood of 30 percent of GDP.

China’s central government does not appear to have large hidden liabilities, but it has other worries. In particular, unfavourable demographics are putting pressure on the public pension system and China’s Academy of Social Sciences has forecast that the pension system’s reserves will be depleted by 2035. The government has been transferring shares in state-owned enterprises to the pension fund and it is considering raising the retirement age to address the situation. But it may have to borrow, on its own account, to mitigate remaining risks.