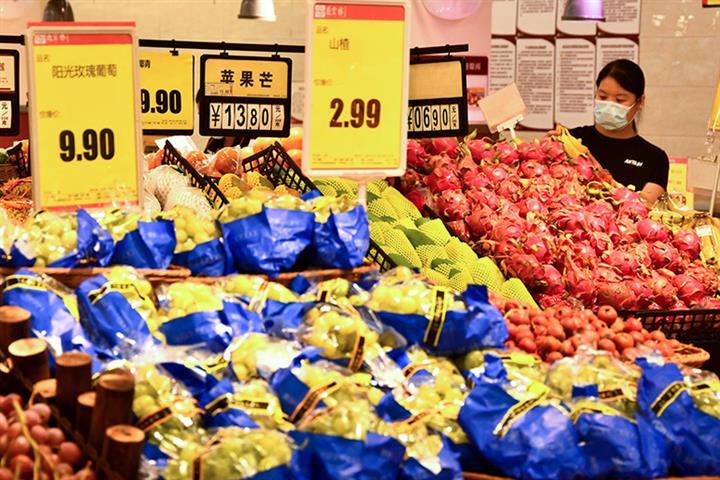 (Yicai Global) Nov. 15 -- Today China released a swathe of economic data for the October period, surpassing expectations by economists. Retail sales had grown by 4.9% year on year against an estimation of 3.5%, whilst Industrial Production increased by 3.5%, up 0.4% from the previous month and against a prediction of 3.1%. Finally, fixed asset investment grown by 6.1%, relatively consistent with the estimation of 6.2% but missing the forecast of 7.3%.

The data bucks a narrative pushed relentlessly by the western media that China’s economy is in a state of crisis or slowdown, aggravated by specific challenges such as energy, inflation and supply chain problems. Instead, it demonstrates the continued resilience of China to face respective challenges especially when it comes to manufacturing, exports and consumption as keystones of growth.

Throughout the month of October, much was made of a global commodity crisis which caused the price of coal to surge, leading to a ripple effect on China’s power supply and the cost shouldered down to factories, who require enormous amounts of energy to fulfil production. This problem translated into a number of hysterical and abjectly negative headlines from the mainstream western media who sought to depict it as bad for industry.

As a New York Times subheading read the crisis would: “damage its image as a reliable manufacturing base” and it was thereby assumed that China’s exports and manufacturing would suffer, hence for two months straight the PMI of manufacturing contracted slightly. However, what was soon overlooked was how fast China brought the commodity crisis under control. In the Middle of October, China’s Coal Futures in Dalian had peaked at CNY3,878 per ton. As of mid-November, the price is now around CNY2,300.

What happened? Through state intervention, China dramatically increased the supply and local capacity, punished rumour mongers who were artificially driving prices up for profits, whilst coordinating price controls. The result is that in the space of a month, state planners had brought the energy crisis under control and offset the damage to industry, allowing growth to recuperate which has also been buoyed by strong demand overseas. It marks yet another crisis whereby the western media made overtly negative predictions, and got it wrong. China has continued to be the most resilient and reliable supply chain, whereby alternative countries such as India and Vietnam have proved themselves unreliable.

Secondly, China’s consumption was also up faster than expected as it demonstrates the success of, not the hinderance of a zero-covid approach. There has been a growing debate in the west surrounding China’s consistency in upholding a “zero covid” approach which involves aiming for the eradication of the virus completely through stringent measures and intervention, as opposed to just allowing the virus to freely circulate as English-speaking countries are resigned to doing. It is argued that China’s zero-covid growth is subsequently detrimental to growth and consumption. As the New York Times published last week: “China’s Zero covid efforts come with a cost”.

There is no evidence of this. China has been able to both save lives and offset economic damage by fast, targeted and localized lockdowns buoyed by all embracing testing regimes which has kept disruption minimal. This has allowed the public to remain broadly confident in their economic and spending activities, as opposed to the constant hesitation, uncertainty and doubt in some western countries in life returning to normal. Hence China’s growth in retail sales were better than anticipated Fast and harsh zero-covid approaches to small outbreaks are far more advantageous than long periods of restrictions, or alternatively doing nothing whereby deaths in the US now amount to over 750,000.

Moving beyond covid, and not yet in the released data, it might be noted just last week on Singles day, Alibaba and JD smashed their own records reeling in USD139 billion of sales, showing again continued growth in China’s consumption. But this also tells another story too, it reminds us that the media have been deliberately exaggerating the extent of regulatory work against these companies, which has been misportrayed as an attack on private sector. This is not true. The goal was not to assert state control over them, the goal of such regulatory critiques has been to make these companies more, not less competitive, again revealing how a preference for politicized narratives takes precedence over facts in reporting on China’s economy.

Therefore, in conclusion, it goes without saying that these better-than-expected numbers are a slap in the face to those consistently pushing negativity and doom-mongering over China’s current situation. On the current trajectory, the country will almost certainly go on to end the year in a better condition than what is currently anticipated as the western “Christmas boom” will see a surge in exports and manufacturing, combined with energy prices under control, and the country ready to do everything it takes to beat off the winter wave of covid which is already seeing restrictions come back across Europe.