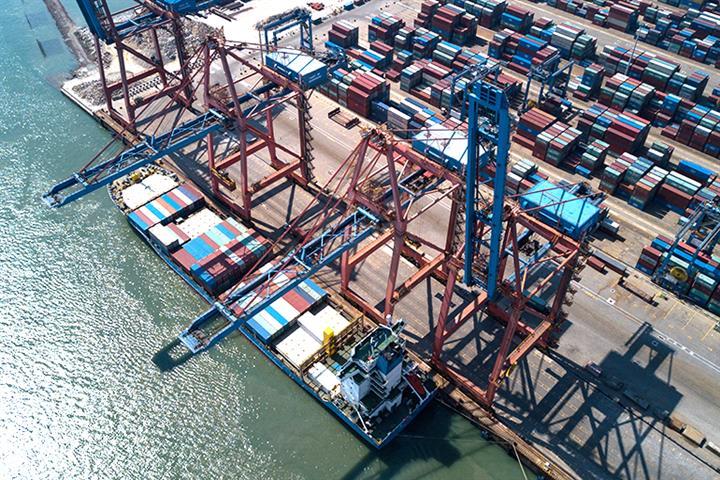 (Yicai Global) Oct. 15 -- Data published this week revealing that China’s year on year exports expanded 28.1% to USD305.7 billion, surpassing the expectations of economists who had forecasted at large only 22%. The surprise numbers come amidst a barrage of negativity surrounding the prospects of China’s own economy following a global commodity price surge which has also provoked an international energy crisis, with plenty of implications for China. The media has taken no hesitation in attempting to frame this as bad news for China’s economy and growth prospects, as is largely on form now for the geopolitically motivated and narrative driven news cycle.

However, despite the challenges posed, the fundamentals of China’s economy remain strong across several areas, and the anticipation of a crisis seems to be lodged in a process known as “wish casting” whereby journalists project their hopes and wishes of what they “want” to happen, in thew view of political bias, as opposed to what actually will happen. This process is also induced by a lack of expertise and a nuanced understanding of China’s political and economic arrangements, which produces ideologically slanted coverage.

First of all, despite disruptions posed by commodity prices and an energy shock, the International Monetary Fund has predicted that China’s Gross Domestic Product is on course to expand 8% in the year of 2021 and then to follow up with 5.6% growth the following year. Much has been made of economists downgrading such predictions, but nonetheless China’s growth consolidates existing gains whereas many other countries are in earlier stages of recovery from enormous annual GDP slumps, of which China avoids. America’s 2021 growth for example is projected by Goldman Sachs to be 5.7%, yet once you subtract the -3.5% incurred the previous year from that number, the tally is less impressive.

Second of all, the prophesized disruption amounted by the Delta Variant and regional lockdowns has not produced the damage to China’s consumer and service economy the western media claimed it would, primarily because China’s swift ability to contain the virus exceeded expectations and bucked a trend where many other countries such as Australia had failed. As a result, the Caixin/Markit services Purchasing Managers' Index (PMI) in September read a 53.4 expansion bouncing back from a 46.7 in August. Logically speaking, the month of October is likely to herald another expansion given so far the virus has been kept at bay and the Mid-Autumn festival was undertaken without disruption.

Of course, this does not mean headwinds do not exist. The surging commodity cost of coal has created a challenge for China as it is a necessity for the country’s electricity consumption and heavy industries, as well as other commodities across the board. Official data from China’s official producer price index (PPI) finds that owing to these difficulties, production costs increased on average 10.7% from September, the highest on record. On the other hand, it is precisely the country’s unexpected surge in exports and growing surplus with the United States that has also contributed to this overdrive. If anything, it is an indication that the Chinese supply chain is strong and functioning, as opposed to malfunctioning, even if the situation risks sending ripples of inflation, to both the consumer at home through rising power prices, but also overseas through rising goods costs.

However, it remains likely that the Chinese government will bring the energy situation under control in view of the winter. It will do so by accelerating the import of coal, expanding domestic production and capacity, increasing the import of natural gas from Russia and revising climate change goals as a short-term contingency. Whilst the mainstream media have of course revelled in negativity concerning the matter and depicted China on the brink, the situation remains favourable to other countries facing an energy crunch, such as the United Kingdom where all energy infrastructure is operated by privately-owned, for-profit companies. Here, the Guardian newspaper stated energy bills spiralled upwards to over GBP100 in September, and could increase up to GBP600 per annum. China’s measures may increase the bill to the consumer somewhat, but will avoid this equally debilitating outcome.

Overall, the Chinese economy faces challenges but those who are obsessed with crying out that it is in a fundamental crisis are wrong, and are placing their intended outcome before an accurate depiction of reality. Its core aspects continue to be strong and consistent, including exports and consumption. The Chinese has the prudency, resources and long-term wisdom to navigate difficulties and ensure a stable environment for economic growth without imposing severe costs on its own population, a strategy which the west has not been able to replicate.