The RCEP Embodies an Optimistic Start to 2022 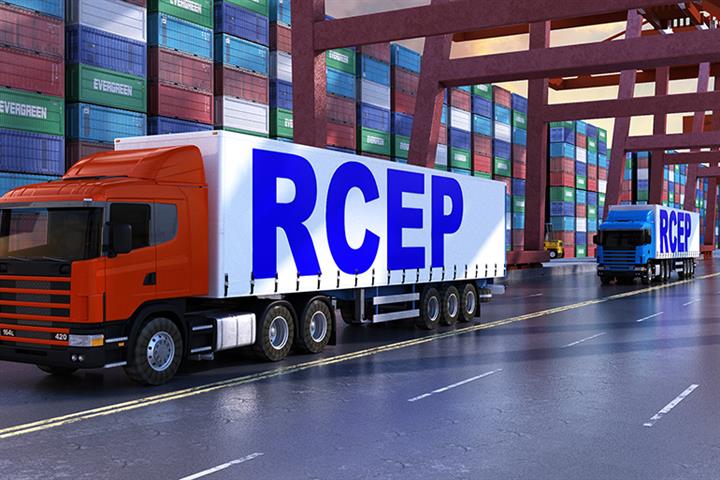 The RCEP Embodies an Optimistic Start to 2022

(Yicai Global) Jan. 5 -- At the very start of 2022 the Regional Comprehensive (RCEP) into force amongst the members who had ratified it so far. The agreement, which involves China, Japan, South Korea, Australia, New Zealand and the Association of South East Asian Nations (ASEAN) will on its full ratification create the largest multilateral trading block on earth, encompassing up to 30% of global GDP and will in the coming years see its members enjoy up to 90% tariff free trade. The agreement has been heralded as a pioneer move towards regional integration, further consolidating markets, consumers and supply chains alike.

Although the mainstream media often depict RCEP as a “China led” agreement rather than a Southeast Asian one, it is nonetheless not misleading to describe it as a political, economic and diplomatic victory for Beijing given the circumstances. In an era whereby the United States is pushing “decoupling” against China, which has involved the weaponization of tariffs, company blacklists and embargos on the Xinjiang Uygur Autonomous Region, Beijing has been able to help push through a mega free trade agreement which involves comprehensively deepening economic ties with several countries the US considers as allies against them, such as Tokyo, Canberra and Auckland.

Since the Trump administration reorientated US foreign policy against China starting in 2018, Beijing has employed a primary strategy of hastening its economic integration with others as a means of limiting America’s leverage to curtail its development through various penalties. As this shift taken place, China’s rhetoric positioned itself as a champion and defender of multilateral free trade, globalization and drew a contrast against protectionism and Cold War politics, whilst nonetheless vowing to accelerate the opening up of its markets and integration into the world economy. As America was pulling itself out, China was pushing itself in.

The completion of the RCEP, although long in the works, was a primary aspect of this strategy. Although the agreement was placed into uncertainty following the withdrawal of India, who’s protectionist outlook seen the deal as unfavourable, Beijing helped force through the ultimate completion of the agreement by the end of 2020 and ultimately sent a message to Washington, who’s political and commentary classes have largely looked at the development with disarray given America’s exclusion from all major trading blocs related to the region. China’s subsequent application to join CPTPP may be seen as doubling down on this approach, thus its agenda in this area is not yet complete.

Irrespective of this, the deal will ultimately serve to accelerate China’s bilateral trade in terms of both imports and exports with the entire bloc. Already in the opening days, new imports from Japan which were not considered previously, have been arriving in major ports such as Shenzhen. This ensures greater economic interdependence throughout the region and as its largest economy, helps place China more at the centre, easing the trade pressure on it placed by the United States. It compliments Xi Jinping’s slogan of a “community of a shared future for mankind” which emphasizes rhetoric of integration, interdependent growth, “win-win” cooperation and globalization.

RCEP is also a reminder that despite hostile rhetoric and ties between Canberra and Beijing, of which accumulated in trade sanctions early last year, that the two countries nonetheless continue to depend on each other and are deepening ties, as opposed to moving further away. It is worth noting that the agreement has not yet reached its ceiling in potential size either, which heralds more cause for optimism. Bangladesh is one country who is considering joining, but other candidates in the future could also include Pakistan, the Maldives, Sri Lanka, and the Russian led Eurasian Union.

Above all, it is no surprise that Chinese media celebrated the agreement with optimism at the start of the year. Whilst it is not a zero-sum game with many opportunities at play, it is nonetheless and perhaps in some cases, incidentally complimentary to China’s own strategic vision, whilst the United States has effectively hastened their isolation with the region they are determined to dominate and shape the future of. How Beijing’s CPTPP application develops will make 2022 a critical year accordingly in the US-China competition.