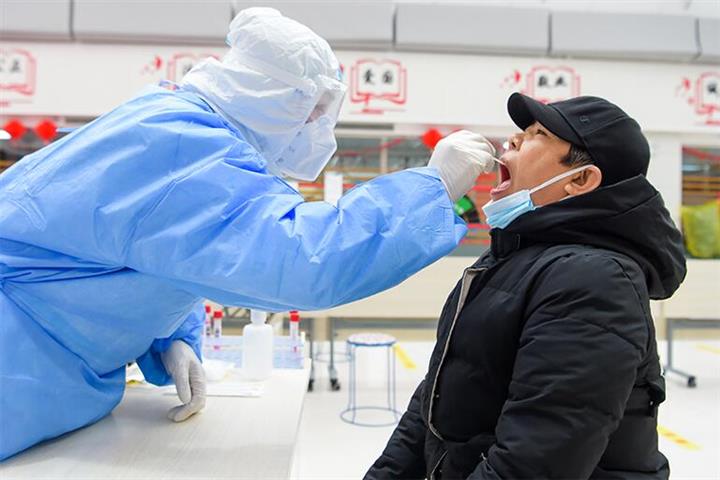 (Yicai Global) Dec. 1 -- On Friday and across the weekend, global markets tumbled amongst the revelation that a new harmful variant of Covid-19 had been discovered in South Africa, which the World Health Organization (WHO) has designated as a variant of concern, with belief it may undercut existing immunity. Despite western countries frontloading travel bans from SA and surrounding nations, by Tuesday the variant was present in a swathe of European countries with evidence of community transmission. The turn of events have dashed what was a slowly building optimism of the pandemic finally moving into a more manageable phase owing to progress on vaccinations in certain countries.

Prior to Omicron’s discovery, this optimism had led to growing media criticism against China and the Hong Kong SAR for continuing to persist in a “zero-covid” approach to pandemic management, which strategizes a total eradication of the virus through tough measures, as opposed to a “living with the pandemic” approach experimented with in the United Kingdom and the United States. In doing so, China has kept the pace of imposing localized lockdowns to eradicate cases, employ comprehensive area wide testing and of course sustain strict limitations on the inflow of international travellers which currently includes a mandatory three-week quarantine.

In critiquing it, a number outlets subsequently claimed that China’s approach was self-isolating and detrimental to business. However, the revelation of the new omicron variant acts as a clear vindication that Beijing’s commitment to zero-covid was the correct decision, and that efforts in the west to offset the pandemic early were pre-mature, populist and unscientific which attempted to frontload a conception of herd immunity without taking due diligence on the risks posed by ever-evolving variants. Even prior to Omicron, for a population the size of China’s, adopting the British strategy would have accumulated in a disaster that scientists estimated would create over 600,000 cases a day.

Whilst China’s hindsight has now proven wise, the economic impacts of Beijing adopting the zero-covid approach have been continually exaggerated by the press, largely for ideological reasons. As of the end of November 2021, official PMI data finds that China’s manufacturing and non-manufacturing barometers are now back into growth and beating estimates, standing at 50 and 52.3 respectively against predictions of 49.6 and 50.8. In addition, China’s Industrial Profits accelerated in the month of October 25% year on year and 8% on the previous month. All these indicators are also evidence China swiftly overcome the energy crisis, of which the media had likewise amplified hysteria over.

The key takeaway nonetheless is that a tough approach to covid has not caused a serious offset to either industry or services, even with semi-regular localized lockdowns springing up in various regions. In contrast to the rest of the world, consumer confidence within China ultimately remains higher due to a greater assurance of stability owing to government action. A city-wide lockdown of several weeks is in the bigger picture, less economically disruptive than an environment of no or minimal restrictions whereby outbreaks are persistent and public confidence to spend is diminished by the necessity to be cautious.

One may look at it like this: If you own a restaurant in China, a localized lockdown over a small number of cases may cost you two weeks of business. Whilst this is still not an ideal scenario, on the other hand an environment of relaxed restrictions with a high-scale outbreak, with minimal restrictions stretched over several months, such as limitations on the number of people attending the restaurant, will produce more prolonged damage to the business, whilst others simply stay away. Whilst some people will still deliver, the revenue derived from social or workplace eating is lost enormously.

A more tentative example is the film industry. In the west, confidence in going to the cinema has been permanently damaged by the pandemic. A typical Marvel Cinematic Universe film would, pre-covid, rank in over $1 billion in box office revenue. However, the Eternals, released in October has only yielded $368 million, well below the norm. In contrast, China’s zero-covid approach has upheld success in their own film industry and allowed Chinese films to become the highest grossing in the world. In 2021, the first and second highest grossing films, the Battle at Lake Changjin and Hi Mom, have grossed $895 and $822 million respectively. Only a zero-covid strategy, which upholds public safety, trust and confidence, could have achieved this outcome, and therefore tells a broader story about the economy as a whole.

In conclusion, China has made the right choice. The rise of Omicron has set off yet another cycle of panic and U-turning in the west, yet again exposing the short-sightedness of populist orientated policies which substitute adequate pandemic management for people’s short-term demands. Everyone of course wants the world to go back to normal, and this is not an easy experience for anyone. However, the reality is that the pandemic must be fought hard against and won, than simply ignored. If the entire world followed China’s approach, we would not be in the situation today staring down at a new and depressing variant set to bring in a dark winter.