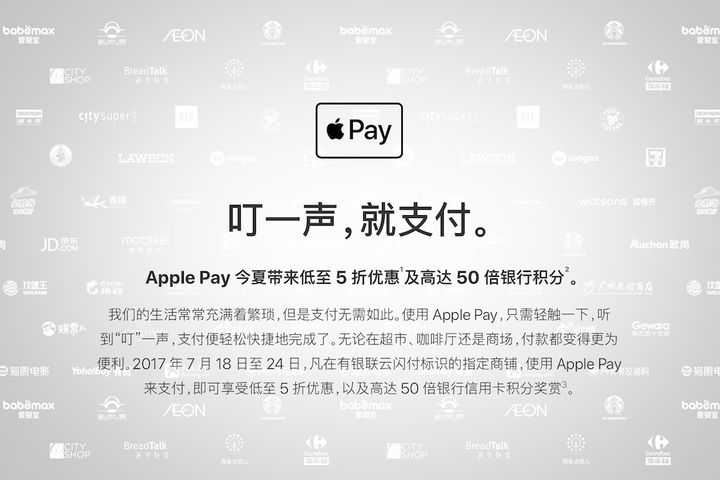 (Yicai Global) July 14 -- On July 13, the announcement of an Apple Pay summer promotion appeared on the official Chinese website of Apple Inc. [NASDAQ:AAPL].

Payment with Apple Pay at designated Apple stores entitles customers up to 50% off and 50 bank bonus points.

Apple hopes to spur the enthusiasm of its users to use Apple Pay via this campaign.

An introduction on Apple's official website promises easier payment in a supermarket, a cafe or a department store. From July 18 to 24 this year, Apple Pay users making payments in designated stores with the UnionPay Quick Pass  symbol can enjoy up to 50% off.

Apple Pay officially entered China on Feb. 18, 2016. Since iPhone boasts a large user base, Apple Pay users could be numerous. However, Apple Pay has no social media aspect (payment via Apple Pay is like swiping a credit card). It has also up to now lacked any promotions, and users thus have evinced little interest in using it as a payment method. Other mobile payment Apps such as Samsung Pay and Huawei Pay have also underperformed Alipay and WeChat Pay.

Apple previously instituted Apple Pay promotions in physical stores in the US, with consumers paying via the app enjoying a 25% discount.
Apple has thus far not disclosed the number of Apple Pay users.