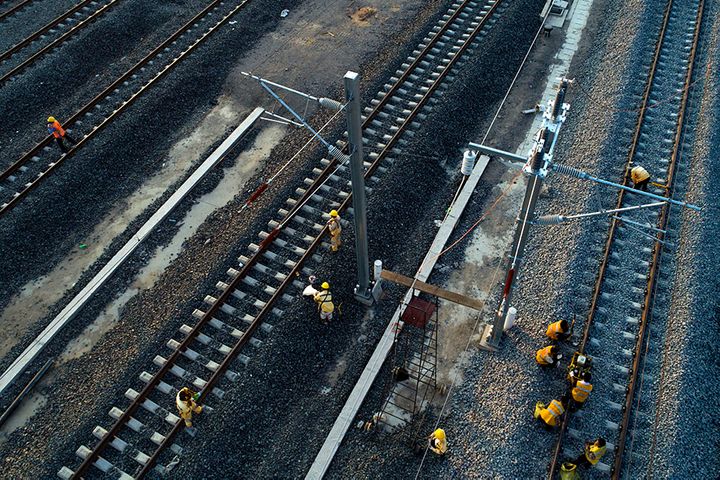 (Yicai Global) Aug. 19 -- China has begun preliminary work on a high-speed railroad between the cities of Kunming in Yunnan province and Shenzhen in Guangdong province. The 1,280-kilometer line will help to spur the rapid development of industries in China's economically underdeveloped southwest.

Early feasibility studies and public tenders for support services kicked off recently, marking the official start of preparations for the project to link southwest China and the Guangdong-Hong Kong-Macao Greater Bay Area, according to the latest information posted on the China Government Procurement Network.

Trains will run at speeds of 250 kilometers to 350 kilometers an hour between Kunming Changshui International Airport and Shenzhen via Guizhou province and Guangxi Zhuang Autonomous Region. The line will have 36 stops and some stretches already exist.

Because the provinces of Guangxi and Yunnan are mostly mountainous and their transport infrastructure weak, their level of industrialization and urbanization has been lower than the national average for a long time. Their combined population was close to 100 million last year, while Yunnan's per capita gross domestic product was CNY37,136 (USD5,271), just 57.4 percent of the national average, while Guangxi's stood at CNY41,489, or 64.2 percent.

The Greater Bay Area aims to build world-class city clusters and drive the development of southwest China by improving transport links and industrial transfer, as per the Outline Development Plan for the Guangdong-Hong Kong-Macao Greater Bay Area released by the central government in February.

Guangxi, China's gateway to members of the Association of Southeast Asian Nations, also unveiled a development plan in June that aims to align with the Greater Bay Area. It proposes building the Beibu Gulf, located between Guangdong and Guangxi, into a regional international shipping hub.