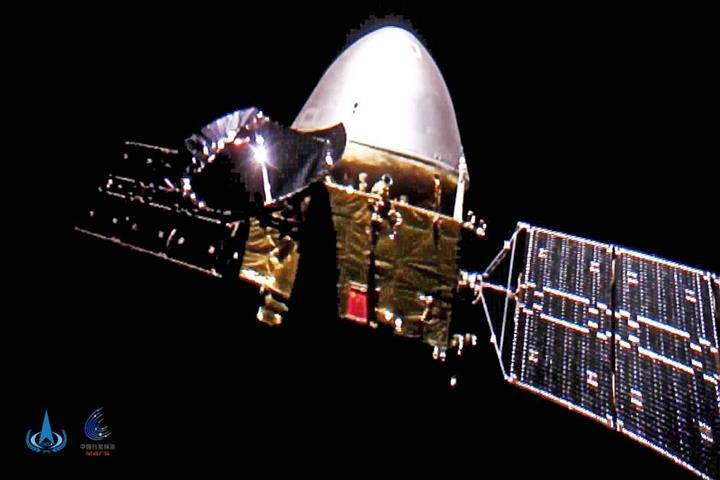 Tianwen-1 reports safety to the motherland and sends its best birthday wishes, said the CNSA in a press release.

The images showed China's five-star red flag dazzling with the golden orbiter and the silver lander and rover in the darkness of the universe.

The flag on Tianwen-1, weighing about 144 grams, is about 39 cm by 26cm in dimension, slightly smaller than a piece of A3 paper. It is sprayed onto the probe with special materials and overprint technology, the CNSA said.

It is the first time that Tianwen-1 took selfies. The images were captured by a separating measurement sensor installed on the outer wall of Tianwen-1. With commands from ground control on Earth, the sensor separated from Tianwen-1 and took one picture every second with its two wide-angle lenses. The images were sent to Tianwen-1 via Wi-Fi and then dispatched to Earth.

As of midnight September 30, Tianwen-1 has flown about 188 million km and is currently 24.10 million km away from Earth. All probe systems are in good condition.

China launched the Mars probe on July 23. It was designed to complete orbiting, landing and roving in one mission. The probe is expected to reach the red planet around February 2021.

The probe has successfully captured a photo of Earth and the moon, and completed mid-course orbital correction twice and self-check on multiple payloads.