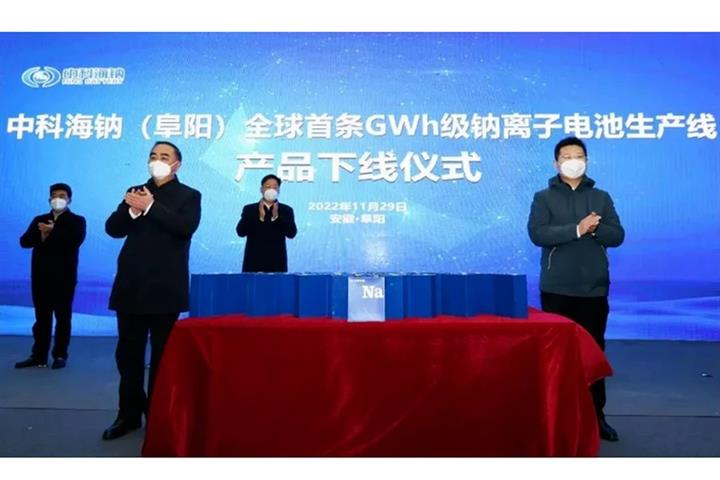 (Yicai Global) Dec. 2 -- China's Three Gorges, which is known for the world's largest hydropower project, has joined hands with partners and kicked off production at the world's biggest factory for sodium-ion batteries which require no expensive lithium.

The first plant with an annual capacity of one gigawatt-hour has started churning out sodium-ion batteries in central China's Fuyang, the Beijing-based renewables giant said in a statement yesterday.

Sodium-ion batteries are more affordable to produce than lithium batteries as the electrode material mainly consists of sodium salts but the cells are heavier and lower in energy density so their probable use is to first replace the bulky and old-school lead-acid batteries.

The current use of sodium-ion batteries is limited, Everbright Securities wrote in a research report recently. But if the technology improves and lithium prices remain high, application scenarios may gradually expand. Next year is the first year of mass production of sodium-ion batteries, and by 2026, the industrial chain is expected to tally CNY48.4 billion (USD6.9 billion), it added.

The project group will promote the technological advance and industrialization of sodium-ion batteries, the owner of the Three Gorges Dam said. The above-mentioned facility was jointly built by affiliates of Three Gorges, including China Three Gorges New Energy and Three Gorges Capital, as well as the municipal government of Fuyang, and HiNa Battery Technology.

HiNa is a Beijing-based sodium-ion battery developer whose research and development team includes several experts in the field, such as Chen Liquan, an academician of the Chinese Academy of Engineering, and Hu Yongsheng from the Institute of Physics, Chinese Academy of Sciences. HiNa has more than 30 relevant invention patents.

Rising raw material prices are driving battery makers to innovate. Contemporary Amperex Technology's sodium-ion batteries can generally meet the needs of cars with a range below 400 kilometers, and the global battery giant will achieve mass production of such batteries next year, Huang Qisen, vice president of the firm's research institute, said in November.

Gotion Hi-Tech and Eve Energy, two other leading domestic battery makers, are also investing in the development of sodium-ion batteries, according to public information.