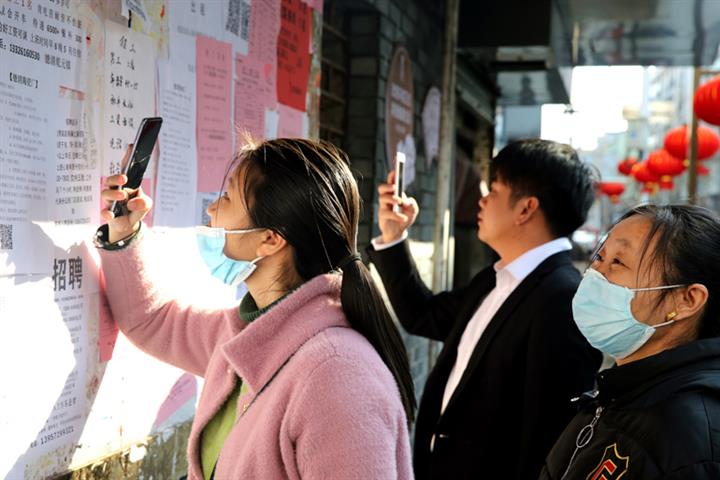 (Yicai Global) Feb. 19 – Chinese companies might be looking to hire more people this year than in 2019 as the country recovers from the impacts of the Covid-19 pandemic, according to a major recruitment portal.

The number of job vacancies posted on 51Job.com should significantly surge in the first half as last year's base is low, the platform said in a recent report.

China was the only major economy to post an increase in its gross domestic product in 2020 as the government quickly intervened after the epidemic emerged in the first quarter of 2020.

Last February was still slow but in the third quarter of 2020, the number of job listings had already risen to equal 90 percent of that of a year ago, according to the report. After that, the numbers were further increasing.

Most of the available jobs were in the real estate sector as the field surpassed the internet and e-commerce sector for the first time in three years in the second half of 2020. But medical device makers were expanding more rapidly with a 16.3 percent increase in listings amid rising export demand.

In the property sector, the number of vacancies grew by 15.6 percent from a year earlier. Some related fields, such as construction and engineering as well as mechanics, logged double-digit climbs too. One-sixth of all the 61 industries had more jobs in the second half than a year earlier.

The real estate sector will probably support the construction and engineering industries this year while other fields, such as healthcare, special services, testing and certification will also have a great surge in demand, the report added.

Another increasingly popular field was the semiconductor industry. Chip companies added 14.9 percent more job listings while boosting salaries the most in 2020.

Private Firms Hire the Most

The pandemic has changed the way companies hire as many jobs are becoming flexible, which will reduce employers' costs but calls for heightened attention to social security policies, said Feng.

China's Ministry of Human Resources and Social Security has extended certain preferential taxation policies till 2022 after the government offered tax deferrals for companies amid the pandemic last year.