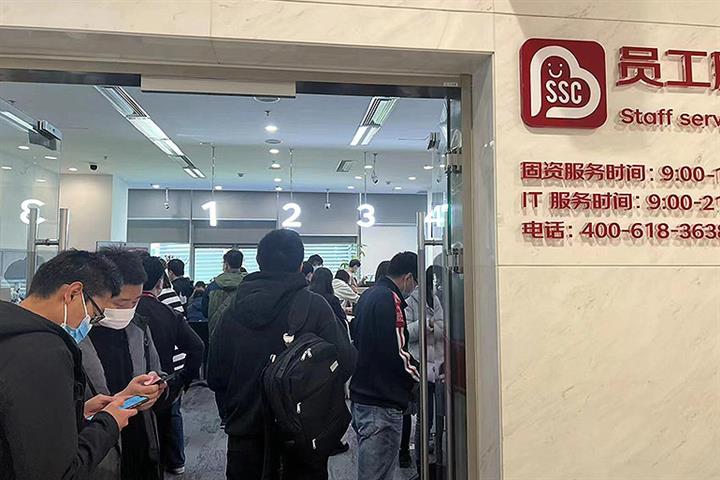 (Yicai Global) April 1 -- Layoffs have been continuing at Chinese tech giant JD.Com for more than two weeks, and Yicai Global has learned that more than 1,000 workers were let go yesterday alone.

A large number of laid-off staff were waiting to hear about the procedure at the firm’s headquarters in Beijing yesterday, one employee told Yicai Global.

A worker made redundant from JD Logistics told Yicai Global that the layoffs in her department tallied about 30 percent. She said no reason had been given, but another former JD Logistics employee said the reason his manager gave was changes in corporate structure.

Layoffs at JD Retail’s V-business team, which includes the pet and books categories, have also resulted from structural adjustments, with around 20 percent of the workforce set to be axed. JD Health’s pharmaceutical division has let go about 20 percent, while online hospital layoffs may account for 60 percent to 70 percent, a staffer at JD Health told Yicai Global.

An internal document obtained by Yicai Global shows that Jingxi has dismissed all of its workers at branches in the provinces of Guangdong, Sichuan and Jiangxi, and the platform’s research and development division has laid off 25 percent of its staff.

One employee told of how the news had been delivered very suddenly. “At the beginning of January, JD Health was still recruiting people, but on Jan. 17 it said that it was going to lay off employees,” the person said. Some new hires interviewed before the Chinese lunar new year holiday have already left, he added.

The layoffs have been carried out swiftly. The employee said that a colleague from another department was notified that their whole department had been made redundant and was asked to leave the company the following day.