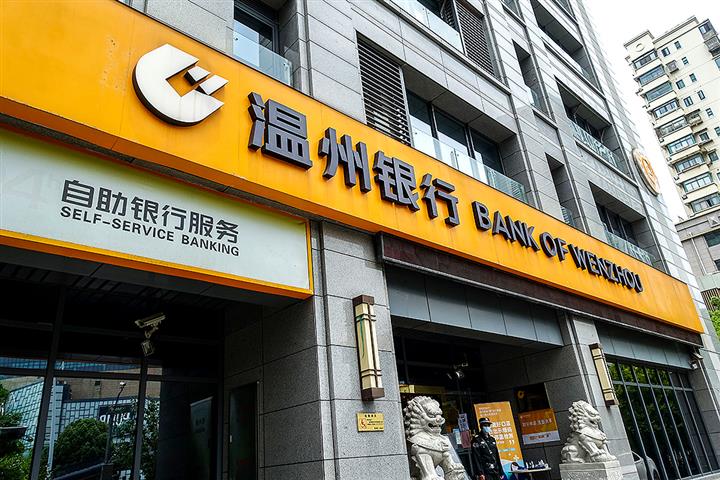 (Yicai Global) Sept. 11 -- The first case of a local government in China using so-called special bonds to finance the purchase of shares in a small or mid-sized bank is in the offing.

Bank of Wenzhou, which is based in eastern Zhejiang province, recently said the local government could buy some of its planned CNY7 billion (USD1 billion) in new shares by issuing special bonds subject to regulatory approval.

Special bonds are usually used to raise funds for infrastructure projects, with repayments financed mainly from a project’s income. On July 1, China’s cabinet proposed for the first time that local government debt issuance should be allowed to replenish the capital of small- and mid-sized lenders.

On Sept. 7, Bank of Wenzhou said it would allocate up to 2.37 billion shares to existing shareholders based on the size of their stakes. The remainder would be bought through local government special bonds, with the Wenzhou government designating the buying entity, the bank said in a statement posted on its website.

The bank is not a publicly listed company. It had 2.96 billion shares outstanding at the end of last year, worth about CNY4.4 each, according to its annual report. Based on that, the new sale will not exceed 44.5 percent of the total, and the per share price of CNY3 will be about a 33 percent discount to net assets.

Local government special bonds have increased the capital replenishment channels for small and mid-sized banks, Zeng Gang, deputy director of China’s National Institution for Finance and Development, said in an interview with the Paper.

That is characterized by capital injections organized by local authorities, which also promotes bank reforms such as facilitating the merger of small lenders, while supporting their long-term development, Zeng said.

Compared with listed banks, private small and mid-sized lenders often face greater capital replenishment pressure. Founded in 1998 by a merger of 29 local urban credit cooperatives and other financial institutions, Bank of Wenzhou had a tier-1 capital adequacy ratio of 8.51 percent at the end of June, quite close to the 8.5 percent threshold required by Chinese regulators.

Issuance of new local government special bonds totaled nearly CNY2.9 trillion (USD424.3 billion) at the end of last month, according to the Ministry of Finance, accounting for 77.3 percent of the year’s entire quota.