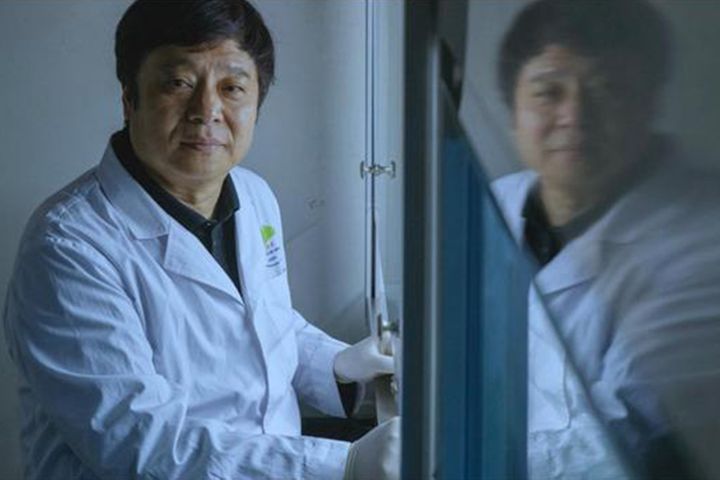 (Yicai Global) Dec. 18 -- The first apparently published reported use of the CRISPR–Cas9 gene-editing system in a person occurred this year when a study by Prof. Deng Hongkui with Beijing's prestigious Peking University demonstrated that the decade-old technology can generate a potentially unlimited supply of immune cells that are proof against infection by human immunodeficiency virus, the journal Nature reported in its Nature's 10 list of people who mattered in science in 2019.

The demonstration sought to replicate the recovery of Timothy Ray Brown, the so-called 'Berlin patient.' Brown became the first to be cured of the virus in 2008 via a bone-marrow transplant he received to treat leukemia. His doctors had purposefully found a donor with a genetic mutation that turns off CCR5, a protein HIV commandeers to infect immune cells. They erased Brown's immune system, then replaced it with the donated cells, causing the virus to vanish.

The prophylactic mutation in Brown's bone-marrow donor is scarce and virtually absent in China, according to the report. Deng, who was one of the researchers that detected CCR5's function in HIV in the 1990s, thus resolved to take a shot at editing the gene. He took immunologically identical blood stem cells from a donor's marrow, edited them with the CRISPR–Cas9 and transplanted them into a patient with leukemia and HIV, per the report.

"We are hoping for an exact mimicry of the Berlin patient," Deng said at the time.

The patient's HIV was unaffected, however, but the work showed how CRISPR–Cas9 edited cells might work in a bone-marrow transplant without triggering negative effects, Deng stated.

"We were most interested in persistence," he said, adding, "That is the major result of the paper."

Failure to cure the HIV indicated too much haste to practically apply the technology, said Prof. Fyodor Urnov, a biologist at the University of California, Berkeley. Earlier experiments had proven that the clinical results of other gene-editing methods depend on efficient editing. The treatment was doomed to fail with such a slight proportion of edited cells, Urnov said. "Their work will stand as an example of how not to do this," he predicted.

Deng, who stands by his experiment, hopes soon to implant a greater ratio of gene-edited cells and wants to come up with ways to reprogram cells into more readily editable pluripotent stem cells -- those able to turn into various types of cells -- and transform these into blood stem cells. "That would be perfect," Deng said.

"A stem cell is a cell with the unique ability to develop into specialized cell types in the body," is how the yourgenome website of UK-based scientific research institute Wellcome Genome Campus defines the term.

"CRISPR ...stands for Clustered Regularly Interspaced Short Palindromic Repeats, which are the hallmark of a bacterial defense system that forms the basis for CRISPR-Cas9 genome editing technology," according to the Eli and Edythe L. Broad Institute of MIT and Harvard.