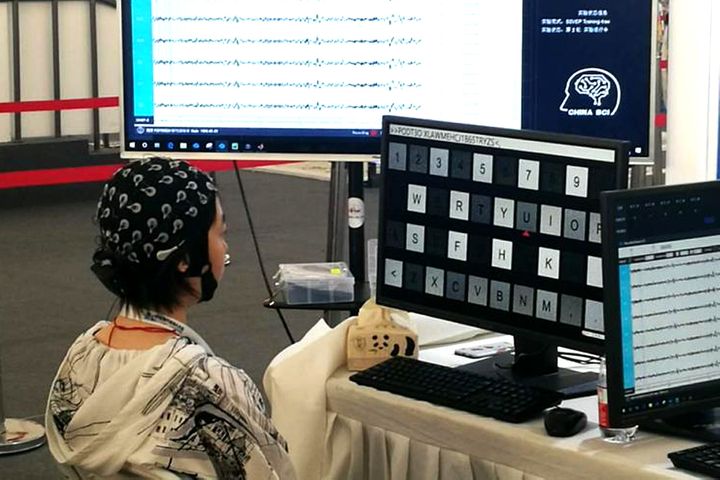 (Yicai Global) Aug. 26 -- A Chinese graduate student has made a new record regarding how fast humans can type Chinese characters by using a brain-computer interface, winning a competition at the World Robot Conference 2019 in Beijing.

Wei Siwen, a second-year student at the School of Precision Instruments and Opto-Electronics Engineering in Tianjin University, showed fair visitors how she could type 69 Chinese characters per minute via BCI, which is about nine more than what ordinary people can do by hand on touchscreens, Science and Technology Daily reported.

Wei could control her brainwaves the best among the 40 participants in the BCI performance contest at the annual fair that closed yesterday. More than 2,000 people participated in the first round of that division, and 400 in the technology-related category of the competition. In the tech group, a team from the University of Macau and the University of Hong Kong won.

Wu Yulin, a research assistant at the School of Medicine at Tsinghua University, explained how the mind-reading device works. A user sees different characters on a screen and a wireless brainwave headset records the electrical activity in the brain, translating that into characters, Wu said.

BCI technologies may be used in various scenarios, according to Wan Feng, a student from the Macau University of Science and Technology. It could, for example, free the hands of astronauts to perform multiple tasks simultaneously.