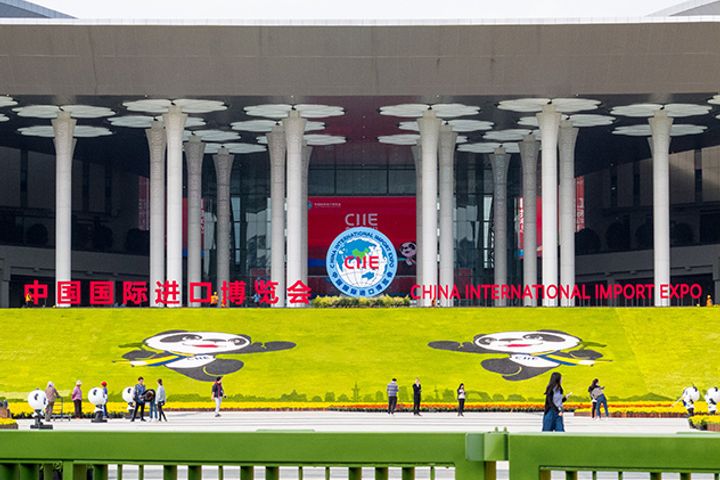 Fully-laden trucks are carting goods for display at the National Exhibition and Convention Center in Shanghai.

Some exhibitors had started to discharge and stack their materials on site from Oct. 23 and began their booth construction the following day. All others had entered the venue where CIIE would be held by today to build their displays, Yicai Global noted.

The fair has a total of 1,800 exhibits in seven zones, more than 1,000 of which are standardized and whose erection will conclude by Oct. 30. The remaining 800 stalls, which are specially decorated, will be done by Oct. 31, while the exhibitors will start to arrange and display their particular installations from Nov. 1 to Nov. 2, Peng Chunyan, head of the CIIE's exhibition services, told Yicai Global.

The first CIIE is to be held in the National Exhibition and Convention Center in Shanghai from Nov. 5 to Nov. 10.

A sharp rise in the number of vehicles and persons displaying is expected today as all exhibitors enter the venue today, Peng explained, adding this will constrain space. The focus of the hosts and organizers is to arrange and manage matters effectively and to make sure that the displays are completed in accordance with the planned timetable.

Some 20 firms have signed contracts to present their wares at the next Import Expo.

The China International Import Expo Bureau released the list of overseas firms that had signed contracts to attend the next fair, among them London-based multinational professional services firm Ernst & Young.

The second Import Expo (the session for firms and business) started to accept pre-registration applications from overseas (including Hong Kong, Macao and Taiwan) companies since July 1 as the large number of attendees at the first CIIE greatly exceeded the expectations of hosts and organizers.

Thousands of firms have submitted their applications through the official CIIE website since pre-registration started three months ago.

More than 2,800 firms from 130 countries all over the world have registered to attend the first CIIE, official data show.