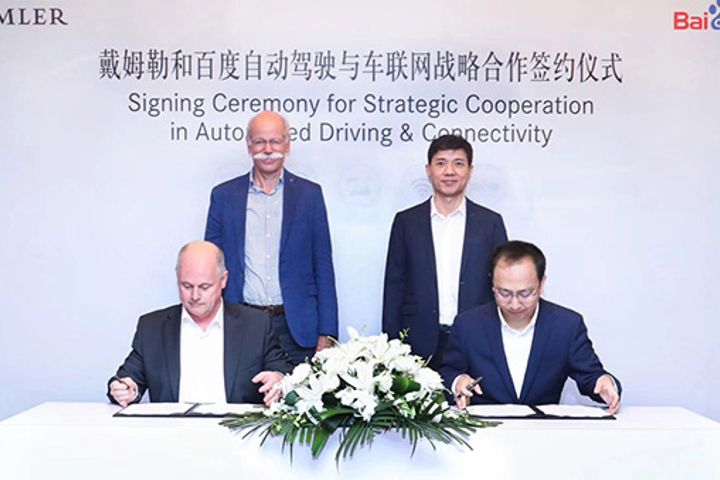 (Yicai Global) July 26 -- Daimler and Baidu, a leading Chinese tech firm, have agreed to extend ties in autonomous driving and vehicle connectivity after starting to test driverless cars in Beijing earlier this month.

The Mercedez-Benz owner and its partner plan to explore a new domain of intelligent connectivity, specifically with regard to Baidu's open source autonomous driving platform Apollo, Daimler said in a statement yesterday. The German carmaker was one of the first partners to work on Apollo when it teamed up with Baidu last summer.

Daimler became the first foreign auto manufacturer to get a road test license for autonomous vehicles in Beijing earlier this month, allowing it to trial Level 4 self-driving vehicles on certain public streets in the capital's Haidian district. Level 4 is the second-highest tier of autonomy and classifies cars that can operate without human input under limited conditions, according to automotive standards setter SAE International.  The cars are based on the Mercedes V-Class and use Apollo technology.

"Realizing local automated driving and connectivity services requires understanding the many characteristics that make the Chinese market unique," said Hubertus Troska, a Daimler board member responsible for Greater China. "With the Apollo platform supporting our road tests in Beijing, our cooperation on automated driving allows us to create solutions that address China's specific conditions" .

The deal is Baidu's second with a German auto titan this month, after teaming up with BMW on July 10 to develop autonomous driving technology in China.