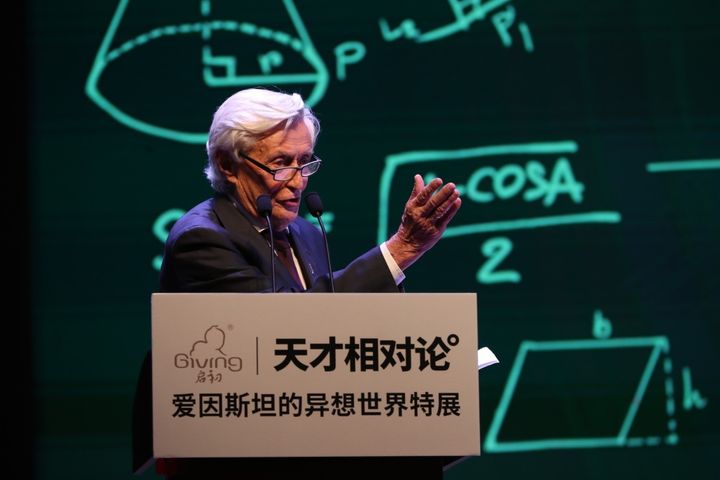 (Yicai Global) Aug. 13 -- Albert Einstein first visited Shanghai in 1922, the same year that he was awarded the 1921 Nobel Prize in Physics. In fact, it was four days before he landed in Shanghai.

Einstein was in the eastern Chinese metropolis for just a day, Nov. 13, and then returned a month and a half later to give a lecture series. Now, on the occasion of the 140th anniversary of the famed physicist's birth, the Albert Einstein Archives Library of the Hebrew University of Jerusalem has brought 133 exhibits, including originals of general relativity manuscripts and gravitational wave papers, to Shanghai for a three-month exhibition.

Some of the exhibits were already shown in Taiwan since the exhibition has been on tour since March, Prof. Hanoch Gutfreund, academic head of the Einstein Archives and former president of the university, told Yicai Global in an interview. But the number of exhibits on display in Shanghai is the most, he said, adding that "Einstein visited the city twice, and there were many stories…"

Eighty-six of the 133 exhibits are originals, including the two-page general relativity manuscripts that are leading cultural relics in the history of science and are being displayed on the Chinese mainland for the first time. Letters between Einstein and Chinese physicists Xia Yuanli and Shu Xingbei and educators Cai Yuanpei and Zhu Jiahua are also on show.

The exhibits shed a light on Einstein's life experience, scientific achievements, philosophical thoughts, beliefs, world view, pacifism, love of art and music, relationships with family members and friends, showing Einstein to be both a genius and an average person, Gutfreund said.

Everybody is welcome to visit the exhibition, not just students, teachers, scientific workers and science fans, he said, hoping that, through the exhibition, everyone can learn why Einstein was so special.

Einstein was one of the founders of the Hebrew University of Jerusalem, and in his will he indicated that he would donate his writings and artifacts to the university. The university's Albert Einstein Archives Library now homes 83,000 Einstein objects, including manuscripts, letters, certificates and medals, making it the world's largest Einstein collection.

The exhibition, which opened on Aug. 2, will enhance links between the university and China, Prof. Oron Shagrir, the university's vice president, said in the interview.

"We have already established cooperation with major universities in China, including Shanghai Jiaotong University with which we have established a strong strategic partnership, Peking University, and Renmin University," Shagrir said. "We are looking forward to have broader cooperation."

Besides cooperation with many Chinese universities on research, the Hebrew University of Jerusalem, which is committed to innovation, also hopes that Chinese students can participate in courses and programs offered by its Innovation Center.

Chinese investors have been focusing on investing in innovative Israeli companies in recent years and have made successful investments. Shagrir said the university's innovation center offers a range of training series to entrepreneurs and students who want to learn about innovation in Israel, learn about the 'philosophy' of innovation. Students will also have the opportunity to take internships in innovative businesses founded by the school's teachers.

"We always encourage teachers and students to innovate," he noted, saying that the innovation center was set up to allow students from all over the world to understand the philosophy of innovation and to learn about the innovation process by tackling real cases.

The university is committed to promoting student exchanges between China and Israel. It sends 60 students every year to China to study Chinese ​​and conduct academic exchanges, Shagrir added, saying that the institution hopes to expand the scope of such exchanges.