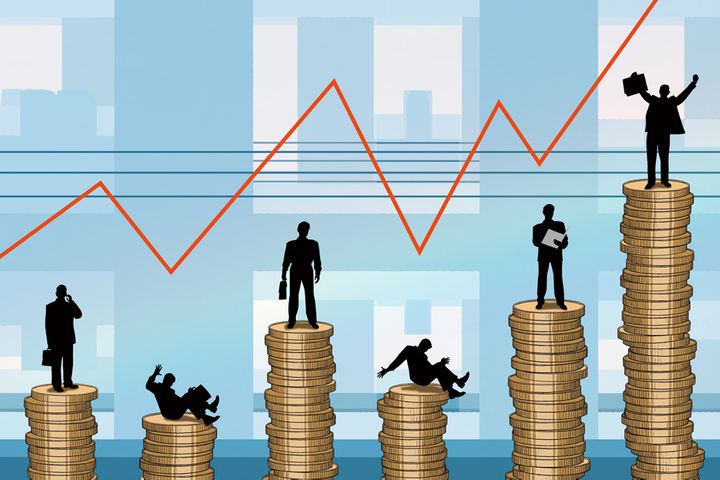 (Yicai Global) April 3 -- Nearly 80 percent of Chinese stock market investors said salary makes up the main source of their income, according to the findings of a recent survey.

For 90 percent of them annual take home pay is less than CNY500,000 (USD74,505) after tax, China Securities Investor Protection Fund revealed in a report that analyzes the basic attributes, asset allocation, investment psychology, trading behavior and expectations of individual investors in Chinese equities.

The survey also showed that the ranks of China's stock investors reached 142 million as of Aug. 31 last year, of which over 99.7 percent were individuals. The survey included a panel data analysis of about 10,000 investors and a random analysis of 162,000 online investors. Nearly 20 percent of the first group and 30 percent of the second group have mortgages, consumer loans and other debt.

The respondents generally have only basic investment knowledge and nearly 70 percent are new to the market. The younger the investor, the less knowledge they have about securities, the survey found. Most have experience in equities, futures, and wealth management products. Less than 10 percent have invested in peer-to-peer lending, private equity and trust products.

A majority put the largest portion of their capital into stocks, followed by deposits and banks' WMPs. They mainly use investment returns to improve their lives. Over 70 percent of those surveyed limit the amount of stock investment to within 30 percent of household income.

About half value long-term gains and stable growth, while 20 percent favor short-term gains. More than 80 percent are unwilling to take on big risks.

When investing in financial products, the respondents are mainly concerned about yields and risks, with more focus on the former than the latter. They said they make investment decisions mainly based on their own analysis. Less than 10 percent base their decisions on online experts and consultants.

Respondents believe that national and regulatory policies and their investment knowledge are the main reasons for the profit or loss from their stock investments.

The internet, represented by brokerages' mobile apps, is the most commonly used investment channel. Less than 5 percent of investors go to securities firms' branches to buy stocks.

About half of those surveyed said they focus on medium- and long-term holdings. Less than 20 percent favor initial public offerings and shares of companies that are undergoing restructuring. With growing age, investors tend to favor long-term holdings.

The surveyed investors sell shares when the yield ranges between 10 and 50 percent. They generally handle losses through stock exchanges, bargain hunting and selling high.

Respondents proposed strengthening the review of new stocks and improving the delisting system to boost the support given to the real economy by IPOs. They called for a crackdown on fake news and communications.

Set up in August 2005, China's cabinet owns China Securities Investor Protection Fund. Its directors are drawn from the securities regulator, the central bank and the finance ministry. Its work includes indemnifying eligible creditors in accordance with national policies in case a securities company is subject to administrative takeover, custody or other compulsory regulatory measures by the stock market regulator.