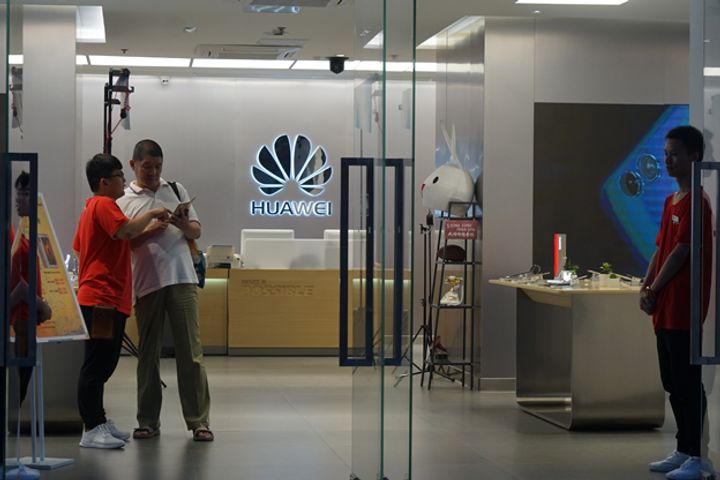 (Yicai Global) Nov. 8 -- Last year's list of top 100 software companies in China has now come out, and Huawei Technologies came in first, a slot it has held for the 17th straight year.

China's industry and information technology ministry calculated and released this ranking yesterday on its official website after its approval by the country's statistics bureau.

The threshold for inclusion this year was CNY1.62 billion (USD240 million) revenue in the software business last year, up CNY170 billion, or 11.9 percent, from last year.

The aggregate revenue from the software business last year of the firms who made the cut was CNY771.2 billion, up 16.5 percent on 2016. Shenzhen-headquartered Huawei Technologies came in first for the 17th year since the advent of the ranking, followed by Shenzhen-based ZTE and Haier Group of Qingdao, Shandong, province, in second and third place.

Thirteen firms had software business revenue over CNY10 billion, with four newcomers this year, while 47 had software business revenue of over CNY4 billion, with nine companies added to their club. The overall revenue of software companies included in last year's list was double that of five years ago, inducting 11 firms with revenue topping CNY10 billion and another 28 coming in with income over CNY4 billion.

More than one-third of companies ranking last year had over 20 percent revenue growth, while nine firms among them had growth cresting 50 percent, and 15 climbed more than 10 places.

Among the most swiftly advancing companies was Beijing-based Teamsun Technology, which surged 41 places after a service transformation and creation of the independent 'Teamsun Cloud' cloud computing brand. Beijing's E-Hualu Information Technology jumped 29 places by applying Big Data and artificial intelligence in smart city, transport, security and other areas.

These companies' total input into research and development was CNY155 billion, making up 27.6 percent of that of the whole sector, well beyond its proportion for income and profits. The top 100 software companies' R&D input became the mainstay of that in the software sector, claiming 9.7 percent of overall primary business revenue, and 2.1 percentage points higher than the entire industry average.

The proportion of income earned by the companies included in the list in software products, information technology services and software for systems was 30, 45 and 25 percent, respectively. These companies used Big Data, mobile internet, cloud computing and information technology to rapidly upgrade and create more new service sector forms. Their operating income from cloud services grew over 90 percent last year, with an over-two-fold increase in data processing.

The export business value of the top 100 companies was USD26 billion, with 22.4 percent annual growth. Software exports rose over 50 and over 30 times to Africa and India, respectively. A disparity arose in the growth of traditional main exports and outsourcing, with exports to Europe rising steadily, as US growth was slight, while Japan's slid.