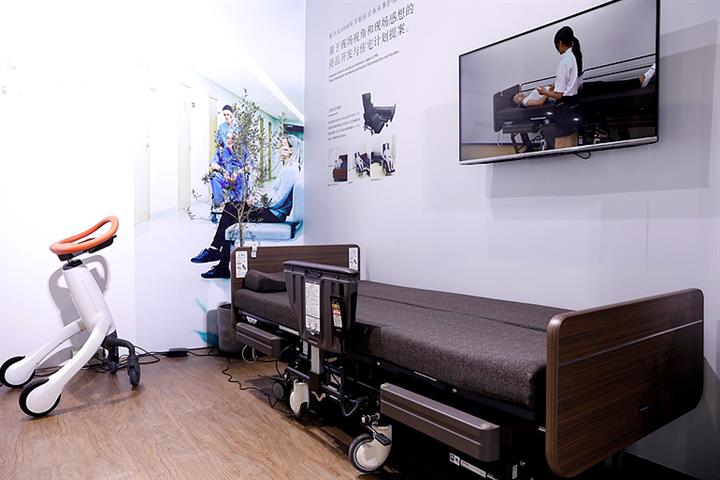 (Yicai Global) Nov. 11 -- Companies from Japan, which has the highest proportion of senior citizens of any country in the world, shared many solutions for old-age care and medical treatment at the China International Import Expo, as they seek to tap into the opportunities presented by China’s rapidly aging population.

Japan has accumulated a lot of experience over the past 20 years in caring for its elderly, Kenji Mizuta, chief representative of the Japan External Trade Organization Shanghai, told Yicai Global.

Electronics giant Panasonic debuted a robot that can help the elderly walk independently at its booth. The robot will be available for sale in China from March next year. The firm also showcased an adjustable electric-powered bed that can help senior citizens get out of bed.

Panasonic is developing an elderly care community with its partner in Yixing, southeastern Jiangsu province, said Tetsuro Homma, president of the Osaka-based firm's China and Northeast Asia Company. The community’s viewing center should be open to the public in June next year.

Japanese firms attending the CIIE were particularly interested in the progress of old age insurance in China, which provides the elderly with health care benefits and supplementary income payments. The Chinese government has been looking into the insurance since 2016 and in September extended the experiment to 49 cities.

China's elderly population is set to exceed 300 million in the next five years, meaning the country will progress to a moderately ageing society from a mildly ageing one, according to the Ministry of Civil Affairs.

There were nearly 220,000 old-age care institutions and facilities in the country as of the end of June, up 26.6 percent from the year before, with 7.9 million beds.