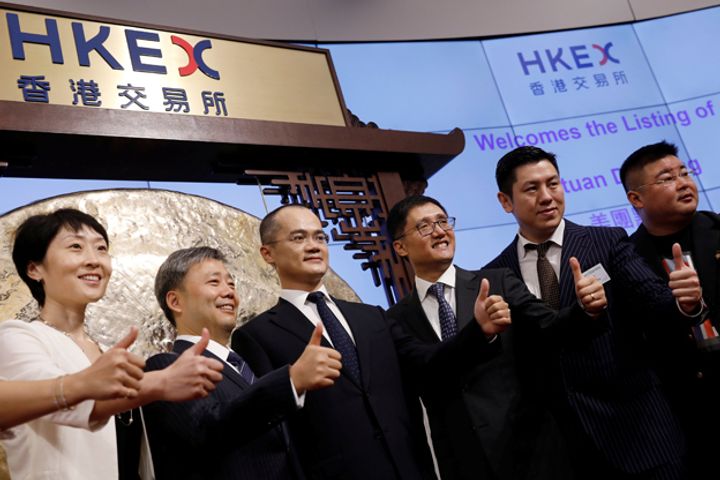 Shares of the Tencent-backed company closed at HKD72.65 (USD9.26) each, up 5.3 percent from the offering price of HKD69. The stock gained 3.6 percent yesterday in the gray market, or quotations through internal systems set up by large brokerages that bypass the exchange.

The unprofitable Beijing-based company has tough domestic competitors in the form of Alibaba Group Holding-backed food-delivery platform Ele.me and leading ride-hailing provider Didi Chuxing Technologies. Despite that and a downturn in the stock market investors embraced the eight-year-old tech firm's initial public offering.

Meituan-Dianping has developed from a startup into China's largest life services e-commerce platform, providing not only a better lifestyle for over 300 million users, but also a new business model for e-commerce in the global service sector, Shen Nanpeng, founder and partner of Sequoia Capital China, said in an open letter today.

Meituan is one of the best examples of China's rapid development of mobile internet in the past decade, he added. Sequoia Capital has about an 11.44 percent stake in the company.

Some 95 percent of the 480 million B shares were internationally placed, while the rest were offered publicly, according to Meituan's prospectus.

Tencent Holdings has a 20.14 percent stake, making it Meituan's largest shareholder, while founder Wang Xing owns about 11.44 percent, the same as Sequoia Capital,  and Alibaba Group Holding around 1.48 percent, the prospectus shows.