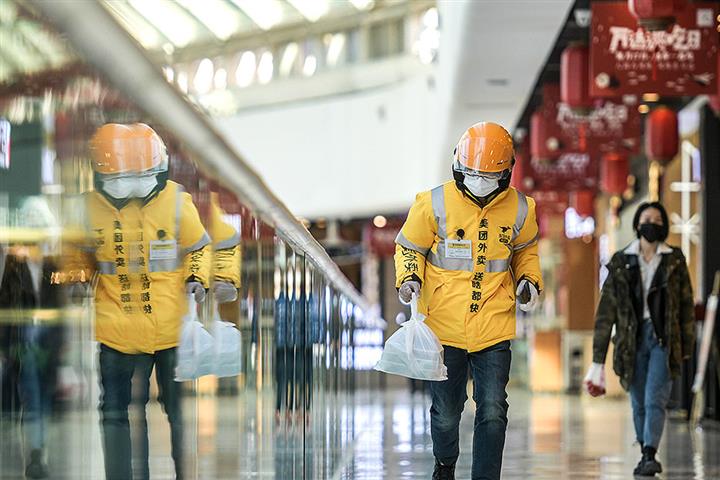 (Yicai Global) April 13 -- Meituan Dianping is open to talks with vendors, The Paper reported today, citing the online delivery platform’s response to the threat of legal action by a southern Chinese catering alliance for monopolizing a provincial takeout market. But Meituan made no mention of the thorny issue of commissions.

The Guangdong Catering Service Association yesterday called on Beijing-based Meituan to stop restricting restaurants from partnering with other delivery service providers and cut its fees to ease the plight of food outlets amid the Covid-19 pandemic.

Catering alliances in Guangdong, Hebei province, and the city of Chongqing in Sichuan province have called on Meituan and its close rival Ele.me to lower their fees for food deliveries as takeouts have become a lifeline for many eateries severely hit by restrictions imposed after the novel coronavirus outbreak.

Revenue in the catering sector is expected to slump 43.1 percent in the first two months of this year to CNY419.4 billion (USD59.5 billion) from a year earlier, according to the National Bureau of Statistics.

Meituan’s takeout business has been running at a loss since it started five years ago, the firm said, adding that its earnings are “far lower than what the rumors are saying.”

Even when it finally began to make ends meet in the final quarter of last year, it was making an average profit of under CNY0.20 (0.03 US cents) per delivery, some 2 percent of its income, it said.

Meituan's income from commissions last year was CNY49.7 billion (US7 billion) and its food delivery costs were CNY41 billion, according to last year’s financial report released in March. It levies a 10 percent to 20 percent charge on 80 percent of its vendors. It also forces new partners to sign exclusive co-operation deals to prevent them from working with other delivery firms.

Most of the firm’s revenue has to be ploughed back to help merchants construct the digital network they need to receive orders online and arrange delivery, said Senior Vice President Wang Puzhong.

Meituan has already offered to refund high-end vendors badly affected by the pandemic by a minimum of between 3 percent and 5 percent of the commission, The Paper reported.