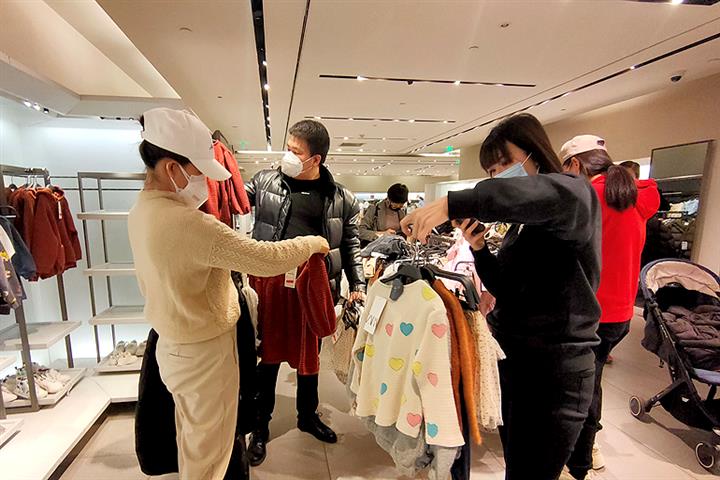 (Yicai Global) March 29 -- China’s household spending falls far behind that in other countries. To increase disposable income, more needs to be done to boost income levels, reduce the wealth gap and improve the social security system, according to a new report.

Online shopping galas and the mass distribution of discount vouchers are not enough, according to a senior researcher at the Suning Research Institute. The country’s consumer consumption to gross domestic product ratio was around 55 percent in 2020, whereas it stands at about 80 percent in most developed countries. The disparity is the same even with countries such as Russia, Brazil and Poland whose GDP per capita is similar to China’s.

To use economist John Keynes’ absolute income hypothesis which states that consumption will rise with greater revenue is too simplistic, Huang Dazhi said.

In fact, the truth is more complicated. Despite having an average gross national income, which is a measure of the total amount of money earned by a nation’s people and businesses, of around USD10,000 per capita, a household’s disposable income only makes up a small part of this.

China's Gini coefficient, a gauge reflecting income disparity, is still much higher than in other countries. And it has been shown by the Marginal Propensity to Consumer theory that the higher the income, the lower the proportion spent on consumption.

Slashing income tax for the low earners is also not likely to have much effect as only about 1.5 percent of China’s population, around 20 million people, pay income tax.

Therefore, to boost spending, it is necessary to increase income levels, improve the social security system and to narrow the wealth gap, Huang said.

Policy makers must increase the share of residents’ income in gross national income. They must address the income gap between rich and poor by increased taxation on the wealthy and offer a better social security net for the needy.

They should also look at a ‘tertiary distribution’ model to promote the development of a ‘charity mechanism,’ Huang said. In this model, primary distribution focuses on efficacy, enabling those with ability, knowledge and skills to earn more. Secondary distribution looks at social responsibility, aiming to narrow disparity through taxes and social security benefits. The third level promotes a ‘charity mechanism’ where the rich willingly set aside part of their wealth to help improve living conditions, education and health care for the disadvantaged.