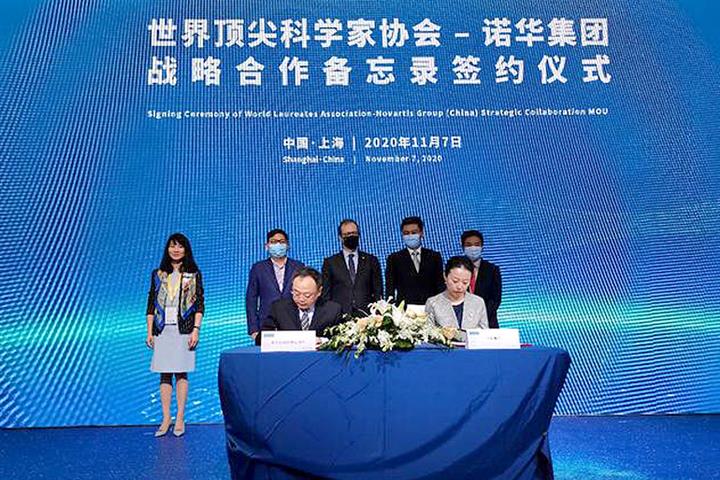 The pair will jointly school the next generation of scientists in new drug research and development, thus demonstrating Novartis’ efforts to integrate technology and healthcare, said Chen Xiaojing, vice president of Novartis China.

The CIIE is a great opportunity for the Basel-based company to showcase its innovative drugs, explore digital medical treatments, and cooperate with the medical ecosystem in the latest efforts to make drugs more accessible to global and Chinese patients, Chen noted.

Shanghai Nuogang Science Group, a joint venture between WLA and Shanghai’s largest industrial park developer Lingang Group, has opted to work with Novartis because it is a renowned pharma firm with a good base in Shanghai and China, the firm’s President Wang Dehong stated. Scientists hope to further develop applied as well as basic scientific research under its aegis, he added.

The WLA is an international organization founded by winners of top global awards such as the Nobel Prize, Wolf Prize and Turing Award, together with well-known entrepreneurs. It is committed to basic scientific research, training of young talent, and international cooperation.

China has become Novartis’ third largest market, Vasant Narasimhan, a member of the US National Academy of Medicine and Novartis’ global chief executive, stated at the third World Laureates Forum in Shanghai on Oct. 30, adding he hopes the country can become the firm’s second-largest market in the near future. Its top two markets were Europe and the US last year.

Novartis posted USD35.9 billion in net sales in the first three quarters, up 4 percent from the same period last year, and USD10.1 billion in core net income, up 15 percent. Its sales in China jumped 13 percent to USD667 million in the third quarter.