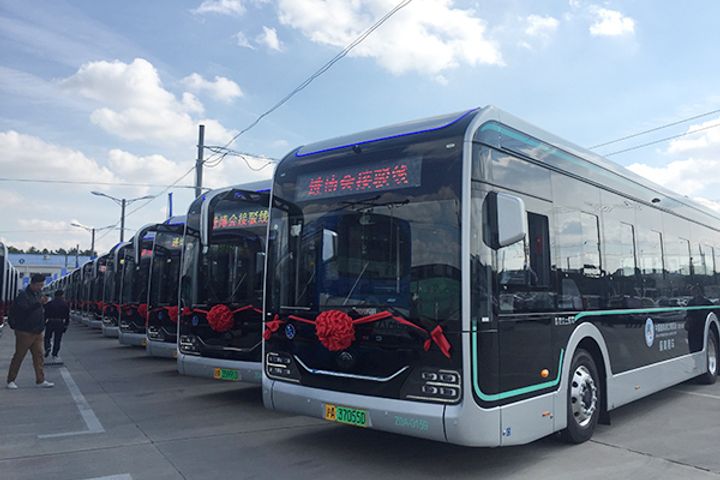 (Yicai Global) Oct. 15 -- A fleet of 440 smart connected buses that prevent drivers from hitting the wrong pedal and warn of collisions will run in Shanghai starting late October.

Shanghai Jiushi Public Transportation Group and Zhengzhou Yutong Bus co-hosted a ceremony for the delivery of the new buses today marking the China International Import Expo's 20-day countdown. The buses will run on three CIIE shuttle routes and on regular ones in core areas, state news outlet The Paper reported.

Jiushi Public Transportation Group and Yutong Bus jointly developed the buses, each of which comes with an intelligent driver space, liquid crystal displays, integral seats and a double-layer ceiling, along with humanized designs such as barrier-free facilities and a multi-functional driver's seat with an airbag and power window. The mileage is up to 300 kilometers, which is enough for the coaches to run for a whole day on one charge .

The most attractive feature of these vehicles is the active safety and intelligent driver-assistance technologies, a staffer at the ceremony explained.
The smart safeguard system for pedal misapplication can, for example, detect a mistaken depression of the gas pedal and alert the driver.

The collision mitigation braking system can also warn of possible collisions between the bus and any obstructions ahead and automatically brake if necessary to lessen the severity of a collision and reduce the probability of an accident caused by the driver's failure to properly react in an emergency. The system can also sound the alarm on potential collisions with other vehicles and pedestrians and warn of sudden lane departures, monitor distances between vehicles and keep to speed limits.