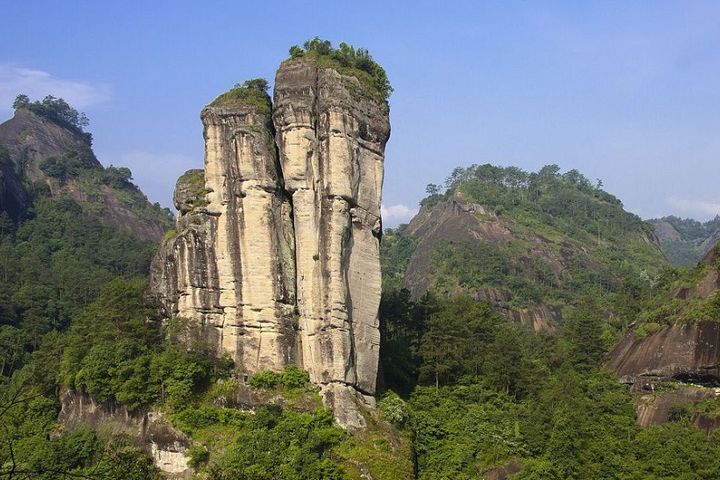 (Yicai Global) July 11 -- Wuyishan in Qianshan in China's Jiangxi province has been included in both the UNESCO World Cultural Heritage List and the World Natural Heritage List, people.com.cn reported yesterday. The successful inclusion in the two lists has made Qianshan the country's fifth and the province's first place to be inscribed as both a cultural heritage site and a natural heritage site.

The 41st session of the UNESCO World Heritage Committee decided on July 9 to include the Mount Wuyi in UNESCO's World Natural Heritage List, meaning North Wuyishan has been successfully included in the world cultural and natural heritage lists, reports indicated. The transition of Wuyishan in Qianshan, Jiangxi, from a world heritage buffer zone to a heritage site is the recognition of Mount Wuyi as a world heritage site, which will help further safeguard natural and cultural value of the area and consolidate its protection and conservation.

UNESCO describes Mount Wuyi as "one of the most outstanding subtropical forests in the world.  It is the largest, most representative example of a largely intact forest encompassing the diversity of the Chinese Subtropical Forest and the South Chinese Rainforest, with high plant diversity." It goes on saying, "It acts as a refuge for a large number of ancient, relict plant species, many of them endemic to China and rare elsewhere in the country.  It also has an outstanding faunal diversity, especially with respect to its reptile, amphibian and insect species."

"Mount Wuyi, located in China's south-east province of Fujian, contains the largest, most representative example of a largely intact forest encompassing the diversity of the Chinese Subtropical Forest and the South Chinese Rainforest.  Of enormous importance for biodiversity conservation, the property acts as a refuge for an important number of ancient, relict plant species, many of them endemic to China, and contains an extremely rich flora and fauna, including significant numbers of reptile, amphibian and insect species," says United Nations Educational, Scientific and Cultural Organization.

UNESCO also refers to Mount Wuyi's historic and cultural importance by saying, "Mount Wuyi was the cradle of Neo-Confucianism, a doctrine that played a dominant role in the countries of Eastern and South-eastern Asia for many centuries and influenced philosophy and government over much of the world."