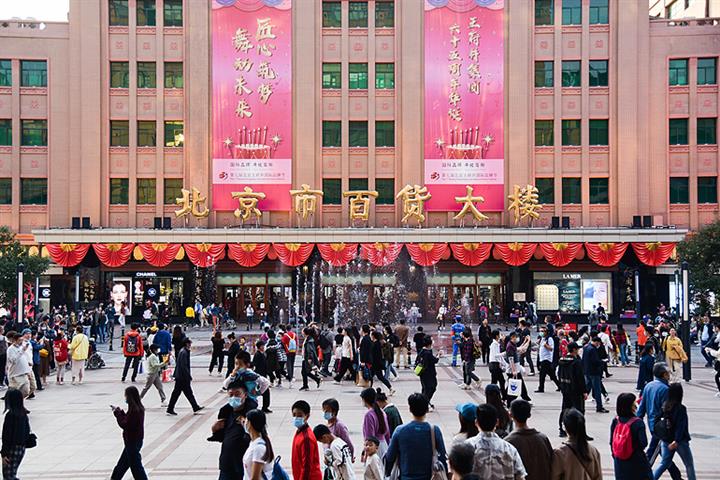 Except for Wenzhou, most of the other cities as measured by the ratio between expenditure and gross domestic product per head are in the north of the country, according to Yicai Global's calculations based on official data from last year.

China's top 10 cities for per capita consumption are Shanghai, Shenzhen, Beijing, Guangzhou, Hangzhou, Zhuhai, Foshan, Xiamen, Changsha and Dongguan. The majority of these are in the south.

Of the 35 cities ranked, 17 reported over CNY30,000 (USD4,470) each in spending per head. Except for Changsha and Wuhan, the others are on the economically developed east coast, with most in the Yangtze River and Pearl River Delta regions and the Beijing-Tianjin-Hebei Region.

The four tier-one cities of Shanghai, Shenzhen, Beijing and Guangzhou along with Hangzhou, a prospective first-tier city that has been developing quickly thanks to the digital economy, each reported more than CNY40,000 in consumption per person.

Last year, each resident of Shanghai spent CNY45,600 on average, an increase of 5.2 percent from a year earlier, and had an average disposable income of CNY69,400, up 8.2 percent, according to public records. The eastern metropolis ranked first both for per capita consumption and per capita disposable income. The amount was more than CNY43,000 in Beijing and Shenzhen, ranking them second and third.

Guangzhou also did well, though it lagged the other three first-tier cities in the development of its finance and internet sectors in recent years, with the number of listed firms from the southern city counting fewer than for Hangzhou and Suzhou. Guangzhou’s per capita consumption was CNY41,999 last year, not far below Beijing and Shenzhen.

That was largely due to higher spending on food and beverages as residents of residents in Guangdong's provincial capital having exceptionally good appetites and a tendency among them to eat snacks late into the night, Peng Peng, executive director of the Guangdong Society of Economic Reform, told Yicai Global.

Seven of the cities each had a more than 30 percent rate for per capita consumption. They were Wenzhou, Harbin, Shenyang, Tianjin, Shijiazhuang, Lanzhou and Dongguan, mostly in the north of China.

Most of the cities with a lower per capita consumption rate were production-oriented or manufacturing cities in the south such as Changzhou, Wuxi, Nantong and Shenzhen, as well as Hefei. Mainly centers of consumer goods production, these large southern industrial cities not only need to meet local demand but also export much, Peng said.

Residents of northern cities are more confident about spending since many work in state-owned enterprises and government agencies and so enjoy better social security benefits, Ding Changfa, an associate professor at the School of Economics of Xiamen University, told Yicai Global.

Migrant workers in many southern cities send most of their salaries back home, which also impacts consumer spending in those locations. At the same time, high property costs constrain consumption. In first-tier cities, residents can spend almost as much on education and training as they do on consumer goods, Ding added.