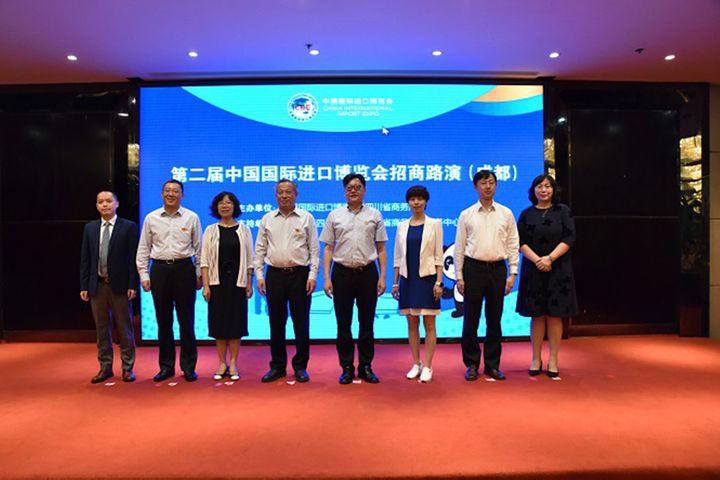 (Yicai Global) Aug.15 -- The second China International Import Expo, which is staging roadshows to drum up buyers for the fair, yesterday hit the streets of the southwestern Chinese megacity of Chengdu.

This is the tenth such event the 2019 CIIE has put on and the first time it has carried out offline investment promotion to buyers in the upper reaches of the Yangtze River. The focus of this roadshow is promotional introductions to the sci-tech life exhibition area and fine foods and agricultural products area, which the CIIE is mainly pitching to Sichuan's private firms, small and medium companies and trade associations.

Buyer registration is underway in Sichuan, said a staffer with the provincial commerce department, who added that the number of purchasers is not projected to be lower than the first CIIE's, noting that the Sichuan Trade Fair at the first expo had over 3,200 buyers and more than 7,000 locals attended the exhibition and talked to sellers.

Sichuanese firms signed key product purchase agreement with companies from the US, Canada, Australia, Japan and other countries at the inaugural expo. These contracting parties are in various industries, among them smart manufacturing, automobiles, energy investment and services.

As a central city in West China, Chengdu has forged economic and trade relations with 228 countries and regions. The total value of its imports and exports passed CNY310 billion (USD28.3 billion) in the first seven months in an annual 21 percent rise. Imports made up CNY137.9 billion in a yearly increase of 13.6 percent.

Chengdu's imports from and exports to countries along the route of China's Belt and Road trade initiative reached CNY84 billion for a per-year growth of almost 14 percent, making up about 27 percent of Chengdu's total foreign trade. Imports and exports increased by 56.3 percent, 52.6 percent and 37.7 percent with Russia, Singapore and Vietnam, respectively.