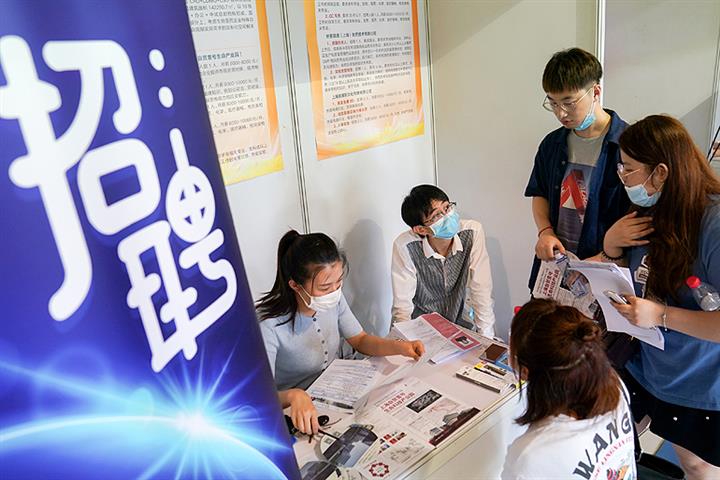 (Yicai Global) July 31 -- University graduates tend to be influenced by the level of regional economic development in choosing where to settle, and last year’s data on the employment of 33 colleges’ graduates showed more than 70 percent of those from Shanghai and Guangdong province choosing to work locally.

Shanghai boasts a huge number of multinational firms and financial institutions, which have edges in research and development and innovation. The eastern financial hub thus exerts a strong pull on graduates in the Yangtze River Delta region and East China in general, one analyst noted.

Guangdong, the Chinese province with the highest gross domestic product and consequently huge workforce demand, urgently needs talent. Its growth in higher education lags slightly behind Beijing and Shanghai and Jiangsu and Hubei provinces, so college graduates in Wuhan, Hunan province and other regions also successfully vie for jobs in the southeastern powerhouse province alongside those from prestigious local universities.

The ranks of graduates staying and working in Wuhan and Northeast China is low, by contrast.

The flow of talent correlates with industries, Yi Baozhong, a professor at Northeast Asian Studies College of Jilin University, told Yicai Global, adding Northeast China has mainly had a limited industrial base over the years, primarily restricted to energy and raw materials, with correspondingly poorly-developed secondary sectors, while newly-emerging and high-end ones have principally formed clusters in coastal regions in the southern and eastern parts of the country.

Graduates from Wuhan, capital of central Hubei province, readily find work in Guangdong partly because of convenient transport links. The province’s economic growth devours masses of talent and the wide gap in higher education between Guangdong and Beijing, Shanghai and Wuhan makes graduates from their prestigious universities very competitive in the area, Peng Zhimin, a researcher at Hubei Academy of Social Sciences, told Yicai Global.