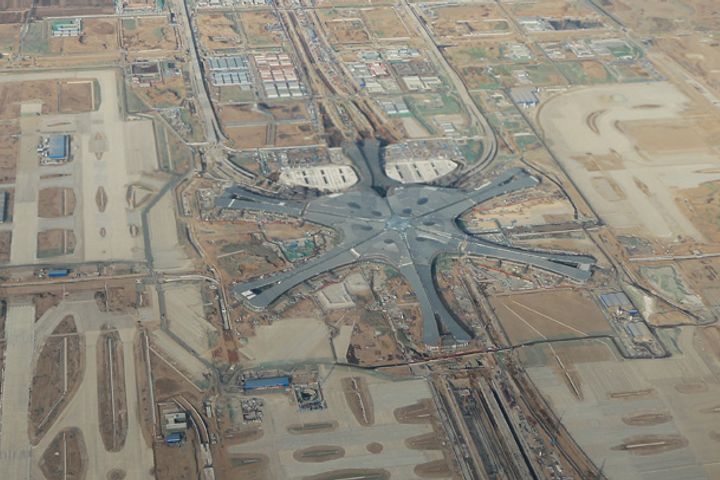 (Yicai Global) May 17 -- Construction of the new airport to serve China's capital is in full swing and on schedule, with the hub due to open to traffic on Oct. 1, 2019, Beijing Daily reported, citing unidentified municipal public works officials.

Provisionally named Daxing International Airport, its terminal is set to be the world's biggest when completed. Building work will wind up by the end of June next year and equipment commissioning will start in July and go on to September, the report said.

Pritzker Architecture Prize winner Dame Zaha Hadid, the only woman to win the prestigious international award, designed Daxing International's terminal building. Many structures around the world bear the hallmarks of her distinctively curvaceous aesthetic. In China, she was also responsible for the Guangzhou Opera House.

Daxing International's terminal is finished, and internal decoration and installation of mechanical equipment are underway, the paper added. Some 90 percent of infrastructure projects to support the airport and overpasses have been finished.

The airport is a large-scale hub and comprehensive traffic transit center integrated with high-speed rail, subway and urban rail links. It is located in the south of the capital along the border of Beijing's Daxing district and Hebei province.

Beijing will add 700,000 square meters of terminal building, four runways and 268 airplane bays when Daxing International is completed, which will ease many international flight schedules and improve the global competitiveness of China's hub airports.

Its design effectively controls the length of the airside concourse in the terminal. The building's partitioned layout shortens passenger walking distance, with that from the center to the farthest departure gate about 600 meters, or an eight-minute walk.

The baggage system also features an innovative design. The average distance from the baggage area to the nearest airport departure gate is only about 230 meters, effectively reducing the time needed for check-in. The average delivery distance of incoming baggage is 550 meters, with the first lot arriving within 13 minutes, thus obviating long waits.