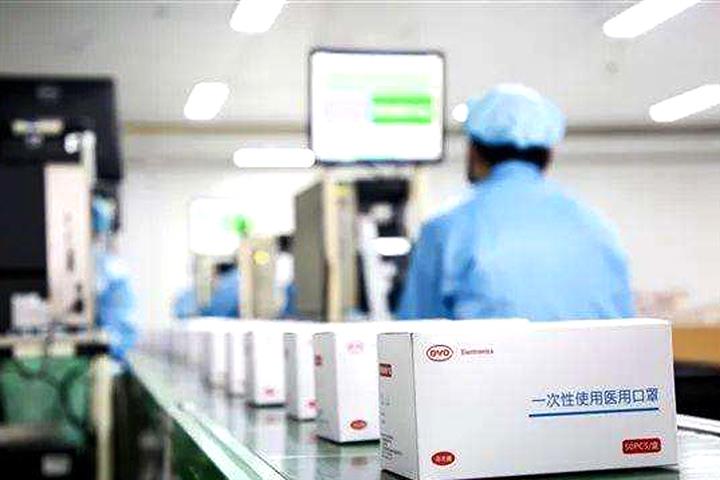 (Yicai Global) April 22 -- Chinese electric carmaker BYD, which began life in 1995 as a rechargeable battery factory, is reinventing itself again. The company has morphed into the world’s largest manufacturer of face masks in the hope that massive global demand will help buoy profit amid stark prospects in China’s stagnant auto market.

If its annual performance weren’t bad enough, BYD expects its profit margin to have collapsed by as much as 93 percent in the first quarter to as little as CNY50 million (USD7 million) due to the battering from Covid-19, the automaker said on April 12.

But all is not lost. At the onset of the epidemic, BYD was quick to start production of much-needed face masks. As of yesterday, it had 300 production lines in operation, churning out 20 million masks a day, financial news site CNStock reported. The firm plans to boost its daily capacity by up to two million units per day to meet demand.

BYD, an abbreviation of Build Your Dreams, grew into one of the world’s biggest mobile phone battery makers and then began to branch out into vehicle production. By 2010 it was one of the largest automakers in China, with a special focus on NEVs. It is also a producer of battery-powered bicycles, buses, forklifts and solar panels.

BYD has secured permission to sell its masks in the US, according to a statement on the Food and Drug Administration’s website. It will also supply Japanese conglomerate Softbank Group with 300 million masks a month, Softbank Chief Executive Masayoshi Son tweeted on April 11. One hundred million of these are N95 masks, with a filtration rate of 95 percent, and 200 million are surgical masks.

While BYD has yet to reveal how much it is earning from mask-making, the extra income will help to prop up its struggling car sales. The new energy vehicle industry was hit by stricter emission standards and significant cuts in government subsidies last year which led to a sharp decline in sales. BYD sold 451,246 cars in 2019, far less than its target of 650,000.