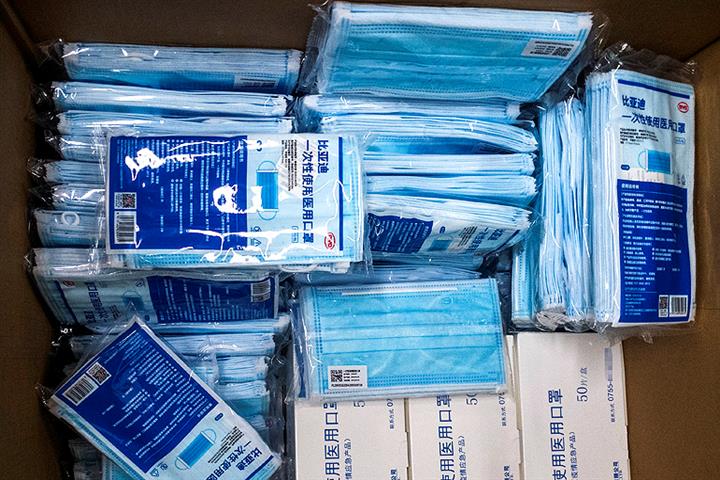 (Yicai Global) June 9 -- BYD, the world’s largest masks maker, will ship an order for 150 million N95 masks to California after finally obtaining certification from the US National Institute of Occupational Safety and Health after over a month’s delay.

Shenzhen-based BYD signed a USD1 billion contract for the masks with California in April. Its factories started production as soon as the firm received approval and the productioncode on the afternoon of June 7, The Paper reported today. It will fulfill the order in batches.

The masks will be distributed to medical workers and others on the frontline of the battle against the coronavirus pandemic, Governor Gavin Newsom’s office said in a statement. N95 masks arevery efficient at filtering out airborne particles.

Better known to the world as a manufacturer of electric vehicles, BYD began officially making masks in February to meet demand during the initial outbreak of the virus. Daily output has reached 50 million, making BYD the world’s No. 1 mask maker.

Under the contract, the Californian government paid a USD495 million deposit. BYD was initially asked to complete NIOSH certification by the end of April. BYD’s masks did not pass the initial certification before April 30, so the contract was extended to May 31. The firm applied for a second time while still failing to gain approval early this month. The contract was extended again to June 12.

The NIOSH said in mid-May that it would accept BYD’s resubmitted application and would expedite a new review. The agency said failure to secure a license is common, with about 30 percent of bids unsuccessful, and that initial submissions are more likely to fail.