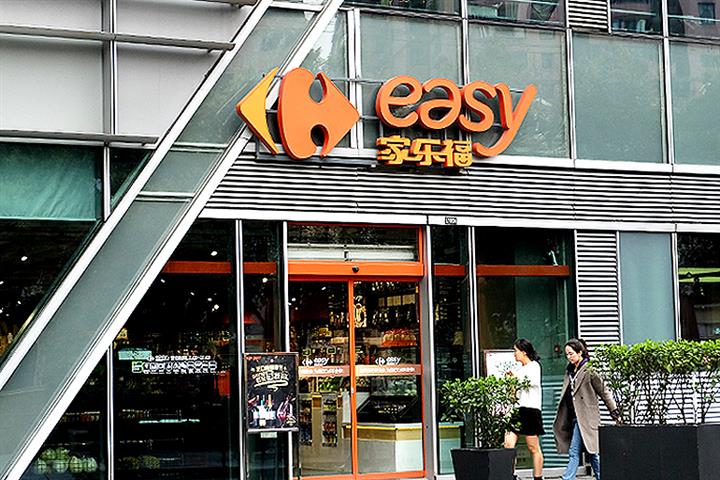 (Yicai Global) Sept. 16 -- Carrefour China, in which Suning bought a majority stake for CNY4.8 billion (USD707.8 million) a year ago, has finished a cost control drive and is preparing to open 15 new stores this year, according to the firm’s chief executive.

The Shanghai-based arm of the French supermarket chain is expanding on the back of a first-half profit by focusing on its digital transformation, Tian Rui said in an interview with Yicai Global yesterday.

Though the pandemic hit Carrefour China's business, cost controls and product upgrades helped the company to turn a profit in the first six months of the year. In the last three months of 2019, Carrefour China made its first quarterly profit in seven years, according to its parent company's earnings report.

Tian also forecast good results for the rest of 2020.

The company is working on a new community store concept that will take advantage of Suning's cloud service for fast-moving consumer goods to offer an improved product offering along with good delivery options, Tian said. At 500 to 800 square meters each, the firm will open them in Beijing, Shanghai, Shenzhen, and Wuxi.

Carrefour entered the Chinese market in 1995 and struggled in recent years amid fierce competition from supermarket chains such as Alibaba Group Holding's Hema Fresh, which relies on a digital presence. Nanjing-based Suning bought an 80 percent stake in Carrefour China last September.

Technology and local retail insights have been key to the old hypermarket chain's newly found success. Suning has integrated its supply chain system and membership services with those of Carrefour China.

By using Big Data, the parent company was able to find 2,000 popular items, mainly snacks, drinks, and condiments, to leverage with premium display space, Tian said. The company has also made the quality of its deli foods more consistent by placing all cooking at its central kitchen.