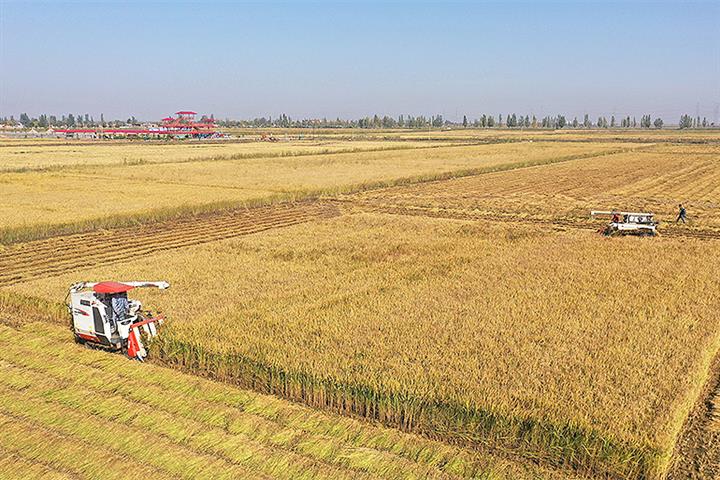 (Yicai Global) Sept. 28 -- China’s grain production is expected to surpass the goal of 650 million tons for the eighth consecutive year this year despite natural disasters and the Covid-19 pandemic, according to a government expert in crop production.

Summer grains and early rice have been harvested and crops in the autumn growing areas, especially those of northern regions, have been good so the harvest is likely to be promising, Zeng Yande, chief agronomist at the Ministry of Agriculture and Rural Affairs, said at a press conference today. Moreover, the planting area was enlarged this year, he added.

The National Bureau of Statistics categorizes the country's annual grain production in three parts, including summer and autumn grains, as well as early rice. Autumn grains, which include corn, late rice, soybeans, and potatoes, make up more than 70 percent of the total output. Meanwhile, the main variety of summer grains is wheat.

Farms have withstood serious natural disasters while farmers have been able to continue working during the pandemic due to timely logistical adjustments, Zeng said. Some areas close to the Yangtze River have been experiencing extreme weather such as very high temperatures and drought this summer, and agricultural production has been affected to a certain extent.

Moreover, international commodity prices have majorly fluctuated but the government has effectively responded by ensuring the supply of agricultural materials for domestic production, Zeng said. Food prices have generally been stable this year as the government has issued a one-time subsidy of CNY40 billion (USD5.54 billion) to farmers, stabilizing incomes, he added.

Zeng did not disclose a prediction about this year's autumn grains. The NBS usually publishes its statistics on annual grain production in early December. However, the bureau said earlier that China produced 147 million tons of summer grains this year, an increase of 1 percent from a year ago. It also harvested 28.1 million tons of early rice, up 0.4 percent.

Last year, China recorded 509 million tons of autumn grains, and the total grain output reached 683 million tons in 2021, based on data from the NBS.