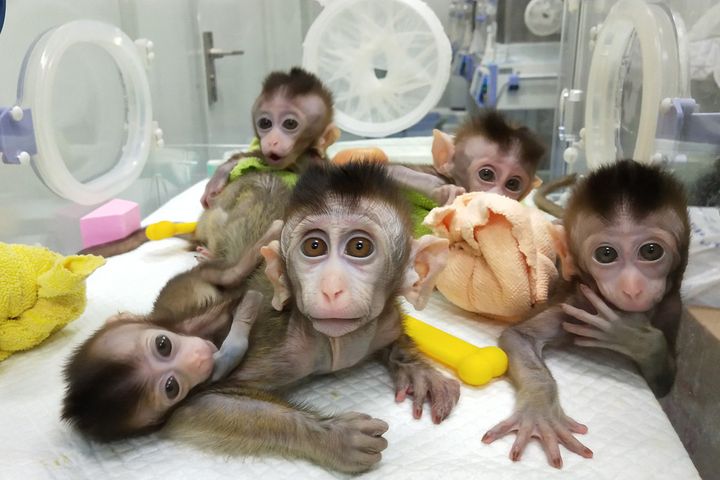 (Yicai Global) Jan. 24 -- China has cloned the world's first batch of monkeys with genes edited to cause mental illness for research purposes.

A team from the Institute of Neuroscience at the Chinese Academy of Sciences used genetic editing tool CRISPR to clone five macaques, a type of monkey commonly used in medical research, state-backed Xinhua News Agency reported.

The experimental monkeys can be cloned in batches, which will also help reduce the quantity of macaques used in biological research around the world and speed up drug research and development, the report said.

The move follows recent reports that Chinese scientist He Jiankui created the world's first gene-edited human babies in the country, which led to widespread outcry among the scientific community.

A team made up of researchers Zhang Hongjun, Sun Qiang and Liu Zhen created five macaques with different levels of circadian rhythm disorders by knocking out key genes for the first time as part of a project that complied with scientific ethics. They then selected the macaque with the most severe symptoms as a prototype to clone five gene-edited specimens by collecting the nuclei of their somatic cells. The oldest monkey is over half a year old, and the youngest has reached three months.

SCNT is a technique for cloning in which the nucleus of a somatic cell is transferred to the cytoplasm of an enucleated egg. When this is done, the cytoplasmic factors affect the nucleus to become a zygote. The above monkeys were cloned using this technique.

A large number of model monkeys with the same genetic background can be cloned using SCNT within one year. Somatic cells are used to perform effective gene editing in vitro to accurately screen somatic cells of the same genotype. The nuclei transfer method is then used to generate embryos with uniform genotypes, which will be carried by mother monkeys to give birth to gene-edited monkeys with a uniform gene background. This is a key technology to develop animal models for scientific research of human diseases.

One of the main reasons that most brain diseases cannot be effectively treated at present is that mice models used for drug R&D are very different from human beings. Most developed drugs have been ineffective or have side effects when used in human beings.

The success of cloned monkeys will promote China's development of its new pharmaceutical R&D chain and could lead to the creation of new ways of treating Alzheimer's disease, autism, immune defects, tumors, metabolic disorders and other diseases.