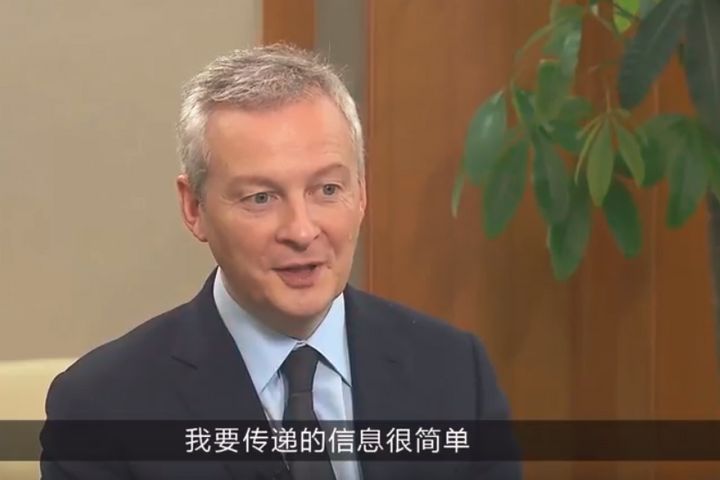 (Yicai Global) Dec. 7 -- The head office of the European Banking Authority will relocate from London to Paris, Bruno Le Maire, French minister of economy and finance has confirmed to media.

His biggest task in China is to restore Paris to its rightful stature in international financial markets, he told Yicai Global on the sidelines of the event in an exclusive interview.

France has turned a new page, departing from the time it saw financial markets as the enemy. She used to fear mentioning finance, but now France will look at it as an important element of economic power and seek cooperation with China and other global first-echelon economies, he told Yicai Global.

"The head office of the European Banking Authority will be relocated from London to Paris," Le Maire assured Yicai Global, marking the first time he has disclosed this to media. "I think this is a very strong signal -- tomorrow Paris will be Europe's foremost financial center. China also hopes to become an important player in the global financial field. I think we can strengthen cooperation in the field. Our goal is the same."

Brexit will weaken the UK's financial market position and afford Paris the opportunity to regain its status as a financial hub. The powerful force driving this shift is tighter European integration and more competitive financial markets.

France does not seek "ravening" and "greedy" financial projects, but instead wants to attract those that are truly pro-economic, pro-business and sustainable," Le Maire told Yicai Global. He also stressed that in the global financial crisis of 2008 French banks were better able to withstand risks than their UK and US counterparts, mainly because of the soundness of the three main businesses of French banks -- deposits, loans and remittances -- and China's support for French banks during the meltdown.

Emmanuel Macron's victory in election "changed the rules of the game," in Le Maire's view. Macron has urged labor law reforms and tax cuts that make Paris more attractive. His tax reform program proposed two key tax cuts: one trims the high wealth taxes on companies and the other pares the personal income tax on high-earners. "France's tax reform is unprecedented. Our policy is not to favor the rich, but to encourage innovators," he said. This has totally made over France's international facade.

Locating Europe's financial heart in Paris has the following advantages, de Bresson believes. First, Paris is the only big city in Europe that can be compared with London. It lies in the very center of the EU and has convenient transport links. Second, Paris is home to many large companies and has the biggest stock and derivatives markets in Europe. Third, Paris's financial technology and green economy have natural advantages in promoting innovation. Most importantly, Paris has instituted more competitive tax reforms.

A consensus statement on this year's high-level economic and financial dialogue between China and France encompasses trade and investment, financial cooperation and climate finance. Some 24 of its 71 items relate to financial cooperation. It recites: "China will allow qualified French banks to develop derivatives businesses in China and share in China securities futures market by establishing securities and futures joint ventures through equity participation."

This is a completely new initiative. French holding companies will also be able to carry out derivatives and futures businesses in China, which will help to provide more investment choices for Chinese investors and better serve the real economy, Le Maire told Yicai Global.