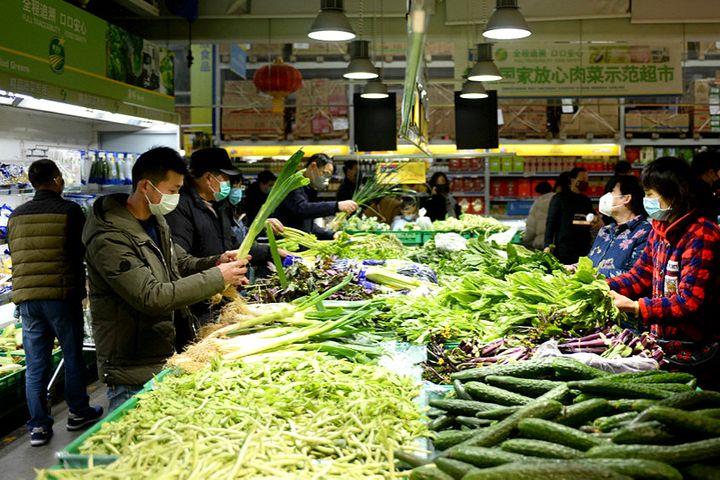 (Yicai Global) April 10 -- China's consumer inflation fell below 5 percent in March for the first time this year mainly due to a decline in the cost of food.

The consumer price index, a main inflation gauge, rose 4.3 percent last month from a year earlier, according to figures released by the National Bureau of Statistics today. That compared with 5.2 percent in February and 5.4 percent in January.

A cooling down of food price inflation was one of the main factors, said Dong Lijuan, a senior statistician at the NBS. Food prices rose 3.8 percent in March versus 4.3 percent in February, the data showed.

The CPI is likely to be high at the beginning of the year and then drop. Commodity prices will remain within a reasonable range, said Peng Shaozong, deputy director of the National Development and Reform Commission's prices supervision bureau.

The temporary stoking of commodity prices as a consequence of the new coronavirus epidemic has greatly subsided, Guo Xiaobei, researcher at the China Minsheng Bank Research Institute, told Yicai Global.

The epidemic's adverse effects on gross demand will become apparent gradually, Guo said. With the exception of medical supplies and services, that will put downward pressure on commodity prices including items of daily use and lifestyle services such as travel.

The price of non-food items, which refers to essential household items that cannot be eaten, are likely to fall because of an earnings slowdown, probably accelerating the decline in the CPI, according to brokerage Huatai Securities.

Soaring pork prices were behind some substantial gains in inflation last year, but that is likely to come down now as the country's hog-rearing capacity recovers from a debilitating outbreak of African swine fever, the NBS' Peng said.

China has sufficient supply of industrial goods and farm produce and the service sector is developing rapidly, creating a solid foundation for stable commodity prices, Peng added. Factories, offices and shops have been reopening for business after the extended hiatus caused by the Covid-19 outbreak.

The cost of transport and telecoms will continue to fall as global energy prices dive and people stay indoors more, China Minsheng's Guo said. The epidemic will affect the price of new clothing and there won't be seasonal price peaks as before. The culture, entertainment and education sectors all remain hobbled by the virus and their prices will fall.

The producer price index, a gauge of industrial profitability, went down faster last month compared with February and the same month last year. The PPI dropped 1 percent from February and 1.5 percent year on year, according to the NBS.

Meanwhile, international commodity prices dropped dramatically in March due to the fallout from the global pandemic. Energy prices fell, crude oil prices hit a historic low and prices of major metals sank, Guo said. The virus has also caused prices of China's industrial products to decline because of decreased orders, he added.