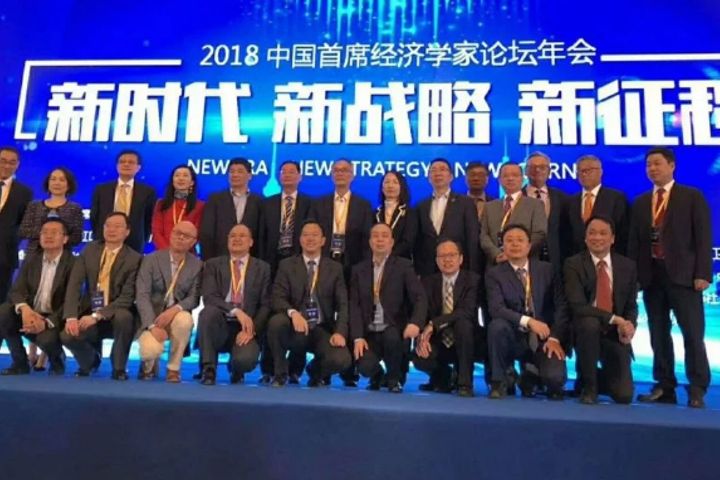 (Yicai Global) Jan. 9 -- Deleveraging is a marathon, not a sprint, and will continue in China for years to come, more than 30 chief economists told Yicai Global at the sixth annual China Chief Economist Forum in Shanghai.

"The US deleveraged the financial sector for six years through 2014 and recovered strongly afterward," said Yu Pingkang, chief economist at Changjiang Pension Insurance Co. "In Europe, it went on for almost the same length. In China, the one-year campaign has effectively curbed the rise of leverage in the macro economy, but it's still at a high level," he added.

Deleveraging has just begun in China, he told Yicai Global. "The fact that our economic growth has exceeded the potential growth rate is a sign of overheating. Inflation is climbing and employment is stable. This is why deleveraging will continue for many more years."

The consensus among chief economists is that China will adopt a progressive and transitional approach to safeguard overall stability and prevent financial risks, but deleveraging has only produced preliminary results so far.

The entire deleveraging process can be split into three phases, said Zhu Haibin, China chief economist at JPMorgan Chase & Co. The first is characterized by a reduction in the speed of deleveraging. The second is to keep debts in non-financial sectors stable and lower corporate borrowing. In the third phase, the nation reduces overall leverage in non-financial sectors, he added.

"The latest data indicates that deleveraging [in China] is moving from the first phase to the second," Zhu said, adding both credit quality and investment efficiency in the country have improved.

China's debts were equivalent to 268 percent of its national gross domestic product in the second quarter of last year, up 119 percentage points from 2007, he said in an earlier interview. However, the overall debt level fell by 1 point from the previous quarter.

"The decline is small, but that was the first time China's overall debt had decreased since 2011," he added.

The country has made some headway in terms of financial deleveraging, Sheng Songcheng, an advisor to China's central bank, the People's Bank of China, said. Business leverage on banks' balance sheets stands at 166 percent, 6 points lower than at the end of 2016. Financial leverage for off-sheet interbank businesses has fallen by 68.8 points to 250.3 percent.

"Leveraging is necessary to stimulate economic development, but the question is where it's really needed," Yu said. "In order to improve economic activity, people need to invest in production and borrow money, which increases leverage. In future, we hope to see more leverage in high-productivity areas and deleveraging in high-energy consumption sectors."