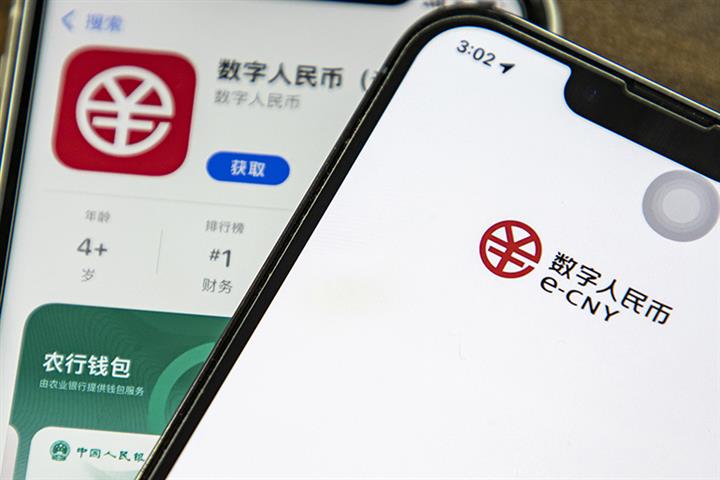 (Yicai Global) Jan. 10 -- New users of the Chinese central bank’s digital yuan wallet have soared more than 20-fold per day on some platforms since it was debuted on Jan. 4, the Security Times reported.

There has been a 20-fold leap in users of sovereign digital yuan on Meituan each day since the app was launched, after the takeout platform said that it was allowing payments with the e-money, the report said. And there has been a 25 percent daily average growth in e-yuan orders and transaction amounts.

The app had been downloaded more than 5.8 million times from Chinese telecoms giant Huawei’s app store as of yesterday, the report said. On the first day it had less than 10,000 downloads.

“I like the simple interface of the e-CNY wallet,” said a Beijing resident surnamed Zhang. “It is so cool to receive and pay money by sliding my finger up or down on the screen.”

JD.com has logged a daily 10-fold jump in new users since it began to allow third-party vendors to accept payments in the virtual money, the e-commerce giant said. Smartphone giant Xiaomi has also opened its app to e-yuan payments.

The trials will be extended to more cities soon, said Wang Pengbo, an analyst at But’one Information. The launch of the e-yuan app is a sign that China’s digital currency has entered the phase of comprehensive quantitative tests.

There were 140 million personal e-CNY wallets and 10 million business wallets registered in China as of Oct. 22 last year, according to official statistics. The total amount traded came to CNY62 billion (USD9.7 billion) and 1.55 million stores accepted the virtual currency.