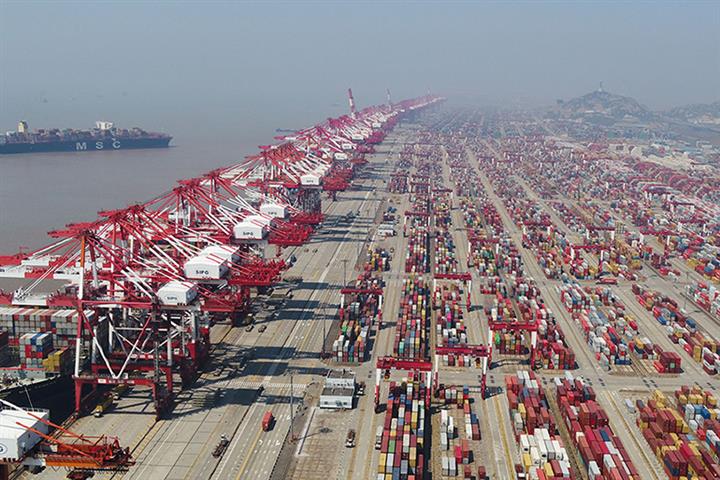 China’s Exports Gain for Second Month in May, Growing Better-Than-Expected 1.4%

(Yicai Global) June 8 -- China’s exports rose in yuan terms for a second straight month in May, defying expectations for a decline and underscoring the country’s recovery from the coronavirus epidemic.

After a sharp rebound in April, exports rose 1.4 percent from a year earlier to CNY1.46 trillion (USD206 billion) last month, according to figures released by the General Administration of Customs yesterday.

Exports continued to increase last month mainly because the country further consolidated its epidemic prevention and control situation, said Li Kuiwen, director of the GAC’s statistics and analysis department, adding that foreign exporters from China also took the opportunity of the return to work to meet global demand.

Huo Jianguo, vice chairman of the China Society for World Trade Organization Studies, told Yicai Global that the sharp increase in exports in April was mainly because the epidemic situation worsened overseas while China resumed production, replacing other countries’ output. But some countries adopted restrictive measures after April, which had an impact on China’s imports and exports, slowing growth in May.

Next month’s foreign trade figures may further improve compared with May, and the overall situation this quarter will also be better than the first quarter, Huo said.

“If foreign trade can maintain positive growth throughout the year, it will be an ideal result,” Huo said.

Customs data shows that the market structure of China’s international trade has also undergone major changes this year. Trade with the Association of Southeast Asian Nations has grown significantly, while that with the European Union, the United States and Japan has declined to varying degrees.

ASEAN replaced the EU as China’s largest trading partner in the first five months of the year, with trade increasing 4.2 percent to CNY1.7 trillion, accounting for 14.7 percent of the total.