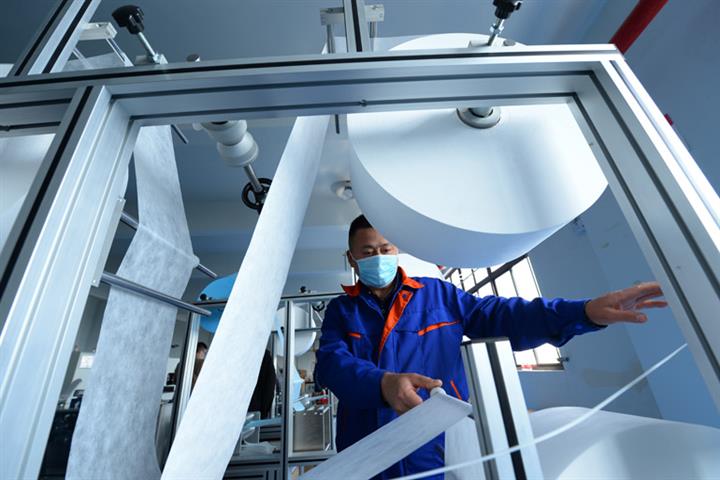 (Yicai Global) June 4 -- Prices of Chinese face mask fabric and production equipment have plummeted due to excess supply after hordes of new manufacturers rushed to the cause during the worst days of China’s coronavirus.

The cost of nonwoven meltblown fabric, with a filtration rate of less than 80 percent, has slumped to less than CNY10,000 a ton from an earlier minimum of CNY400,000 (USD56,192), the 21st Century Business Herald reported, citing an insider at Guangzhou-based medical supplies maker Well Lead Medical.

Buyers who purchased face mask machinery for as much as CNY1 million (USD140,485) during the peak period of the virus outbreak can now ask for a regular price of CNY200,000 to prevent it from being turned into scrap metal, the person added.

New players raced to enter the field early this year amid supply shortages and rising profit margins, but once state-owned giants such as China Petrochemical & Chemical started to boost output, pharmacies' shelves were soon restocked with masks. By the end of last month, the company, also known as Sinopec, pledged to fire up 16 production lines to make as many as 13.5 billion medical masks a year.

Meanwhile, overseas demand surged. As China emerged from lockdown the virus was spreading faster abroad. But exporting personal protective equipment became more difficult. On April 10, China's customs authority started to require exporters to verify product quality through certificates, which caused shipment disruptions that left boxes and boxes of masks lying around in their country of origin.

During the epidemic, new exporters played an important role in alleviating the disparity between supply and demand, but established medical companies are simply bound to eventually take over with stronger advantages in sales channels, the insider said.