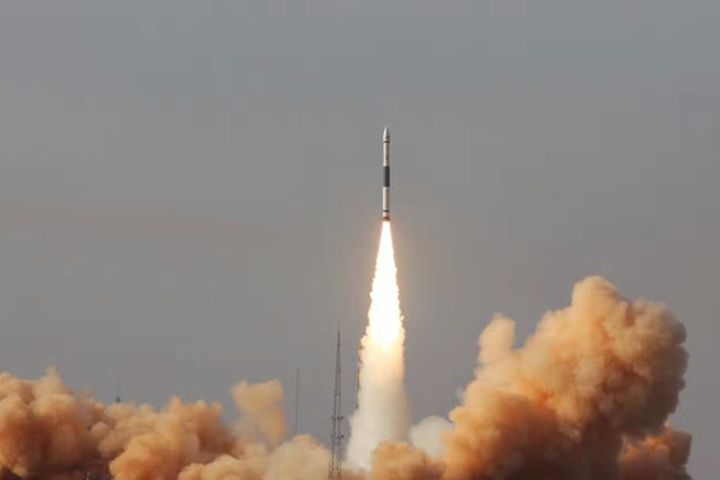 (Yicai Global) Dec. 19 -- China's first commercial rocket company has raised CNY1.2 billion (USD181.4 million) in A-round of financing at Shanghai United Assets and Equity Exchange yesterday. It will use the funds for the development and assembly capacity of Kuaizhou series of carrier rockets, as well as businesses such as the layout of upstream and downstream industry of the commercial aerospace, China News Agency reported.

This round of financing is a public fund-raising from social institutions, and the original shareholders of the company, Expace Technology Co., did not participate in this round, said Zhang Di, chairman of the company. China Aerospace Science and Industry Corporation Ltd. and China Space Sanjiang Group Corporation jointly established the Expace Technology in February 2016.

China's Kuaizhou-11 (KZ-11) solid-fuel carrier rocket "will complete its first mission in the first half of 2018 by sending six satellites into space, while the whole rocket is now entering the test and commissioning phase," Zhang revealed.

The general assembly and overall adjustment center in Hubei-based commercial aerospace industry base "has comprehensively started the project construction and is expected to complete and put it into operation by the end of 2018," Zhang said.

KZ-1A carrier rocket has finished its first commercial aerospace launch mission in "sending three satellites with one rocket" in early 2017. Expace has also signed launch service contract for "four rockets and four satellites" in April, under which the firm will select eligible carrier rockets to perform the mission next year.

"We will support the Expace to develop commercial aerospace in accordance with the principle of socialization, commercialization and marketization," said Guo Yong, chairman of China Space Sanjiang Group.

Expace "is committed to provide commercial aerospace launch service to customers at home and abroad, and will expand its business scope to fields such as satellite applications, launch of spacecraft and deep space exploration." Its major shareholder China Aerospace is a large state-owned high-tech enterprise under the central government.