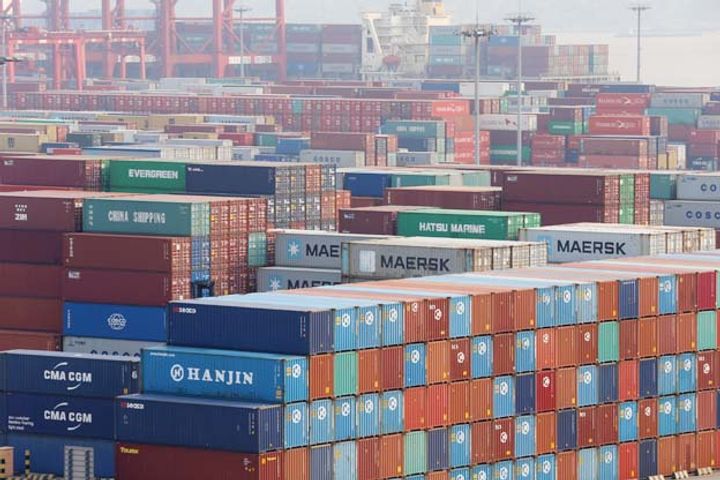 (Yicai Global) Aug. 8 -- China's trade in services hit a record high in the first half of the year as the government stepped up efforts to further bolster and open up the sector.

Service trade rose 8.5 percent to a total CNY2.53 trillion (USD370 billion) in the first six months of this year, compared with the year-earlier period, the commerce ministry said in a statement yesterday. Trade in services refers to the sale and delivery of intangible products such as tourism, advertising, construction, telecoms, transport, computing and accounting.

The deficit narrowed by CNY2.7 billion to CNY848.1 billion as exports jumped 13.6 percent to CNY841.57 billion and imports rose 6.1 percent to CNY1.69 trillion. It was the first contraction of a half-year deficit in eight years.

The narrowing shortfall is due to a rapidly growing service sector, policy support from the government, and increasing exports of emerging services such as telecoms and insurance, said Li Yuan, deputy director of the ministry's service department. The country has made efforts to improve service trade development, including the phased opening of such sectors as culture, finance, education and medical treatment.

Li forecast the deficit to widen in coming years, peaking in 2025, on the back of Chinese demand for overseas study and vacations.

The sector accounted for 15.2 percent of total foreign trade over the period, an increase of 0.1 percentage point annually. The growth rate for trade in services was 0.6 percentage point higher than that for goods in the first half.

In US dollar terms, the nation's service trade was USD397.3 billion, an increase of 17 percent. Exports surged by nearly one-quarter to USD132 billion, while imports gained 14.4 percent to USD265.2 billion, resulting in a deficit of USD133.1 billion.