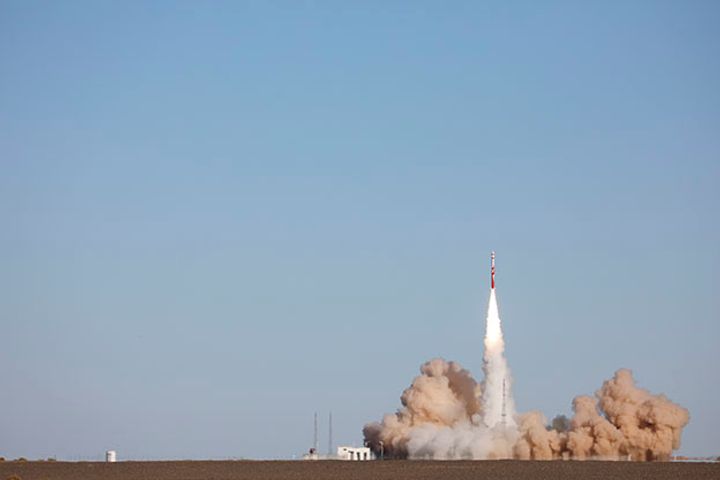 (Yicai Global) Oct. 29 -- The first ever attempt by a private Chinese company to send a rocket into orbit around the Earth has ended in disappointment.

LandSpace Technology successfully launched the Zhuque-1 from Jiuquan Satellite Launch Center at 4.00 p.m. Beijing time on Oct. 27, the Beijing-based company said via social media. All went according to plan until the third stage, when the craft failed to reach orbital velocity. The firm is investigating the cause and will make its findings public.

Founded in 2015, LandSpace was the first of China's wannabe SpaceX rivals to obtain the necessary licenses to send carrier rockets into space. Saturday's vehicle was carrying a satellite for state-run China Central Television, according to media reports.

Private capital has flowed into the sector in recent years with an eye on the lucrative market for putting satellites into orbit. The investments have started to show results. A commercial carrier built by another private Chinese aerospace firm, One Space Technology, completed its maiden flight in mid-May.

The number of China's non-state players is surging with technical breakthroughs being made constantly. Also included among emerging names are LinkSpace, iSpace and ExPace. Landspace, One Space and iSpace have already completed several rounds of financing and the latter pair have launched several suborbital rockets.

Demand for launches is quickly fathering pace as state-owned enterprises represented by China Aerospace Science and Technology and China Aerospace Science & Industry pay more attention to high orbit and heavy load technologies. They find it difficult to cover commercial demands for medium and low orbits. The success of SpaceX in the US leaves industry figures in no doubt over the demand present in the commercial launch market.

However, the race to deliver orbital payloads will be a hard slog. Serious challenges regarding engines that use liquid propellants and heavy loads need to be overcome. A number of companies, including LandSpace, have revealed their latest progress on the development of liquid oxygen/methane engines. Funding and orders are also other tests.

The cost of privately developed rockets needs to be cut further to ensure their core strengths as state-run players look to join the commercial rocket arena.