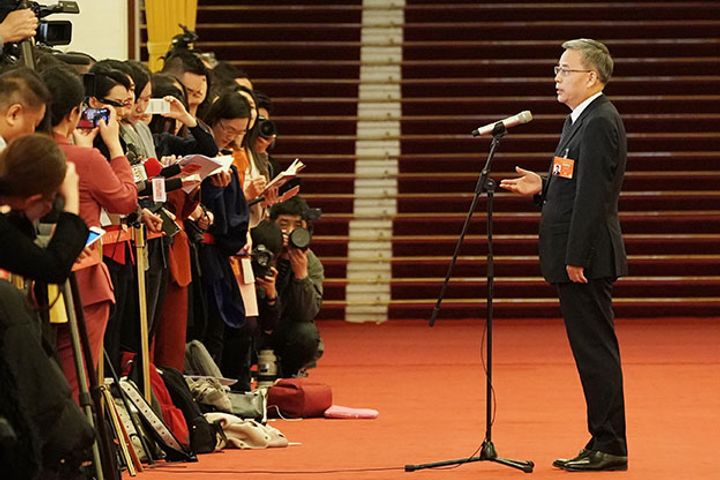 (Yicai Global) March 6 -- China will  continue to expedite its financial opening-up this year, the party  secretary for the country's central bank has said at the annual meetings  of the National People's Congress and the Chinese People's Political  Consultative Conference, the country's top political advisory body.

"China and the US can definitely reach a  consensus on financial opening-up," said Guo Shuqing, party secretary  of the People's Bank of China and chairman of the China Banking and  Insurance Regulatory Commission.

China has been opening up the sector  through its own initiative to meet demands in the country since the  reform and opening-up policy started 40 years ago, he said, adding that  the two countries have had numerous exchanges related to finance and the  US could abandon its accusations that China is an exchange rate  manipulator in the future.

Guo stated that the achievements made  during the seventh round of trade talks between the two countries  warrant attention, adding that "further financial opening-up is  inevitable."

The opening-up of the finance sector has  accelerated since last year with measures including the easing of  foreign ownership restrictions, liberalizations in market access and  improved regulatory rules for foreign institutions. Many foreign banks  and insurance firms received approvals to enter the China market in  2018, Guo said, adding that existing foreign players have also expanded  their business scope and the trend will continue this year.

Providing financial support to private  firms goes hand in hand with supply-side structural reform in the  finance sector, he stated. China should adjust its institutional, market  and product systems.

China's big five commercial lenders and  12 joint-stock commercial banks have set up the inclusive finance  divisions specializing in loans and services for small firms, Guo noted,  adding that loans to customers with a credit line of up to CNY10  million (USD1.5 million) rose by over one-fifth last year, representing  the sector's fastest-growing area. The government aims for a 30 percent  rise, according to a working report for this year and Guo said the goal  was achievable.

Aside from the banking system, China  will also make efforts in insurance, Guo added, saying that the sector  boasts around CNY16 trillion in investment funds for private and small  firms as well as micro-businesses.

China should do more for direct  financing to build a stronger capital market and provide better support  for innovative firms. In particular, the country should develop  multi-level capital markets, including large exchanges, regional equity  markets, private equity and venture capital funds, which have been  proven to be good investment channels overseas. They can give greater  support to firms and products that feature stronger innovation  capabilities but greater risks and potential for failure, he said,  adding that the supply-side structural reform is multifaceted.