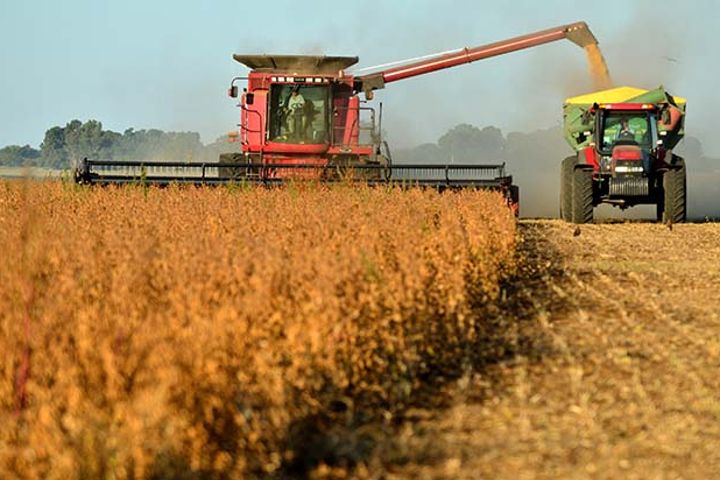 (Yicai Global) Aug. 9 -- Many Chinese grain companies are turning their backs on the United States as they look to seek alternative import sources given the escalating trade tensions between the world's largest economies.

There is ample global supply and imports from other countries and regions can fill the void left by not purchasing from the US, state-backed China News Service reported yesterday, citing Yu Xubo, president of China's largest grain firm China National Cereals, Oils and Foodstuffs.

Soybean was among the more than 500 American products which Beijing subjected to an extra 25 percent import duty on July 6, in retaliation to Washington slapping USD34 billion worth of Chinese imports with the same rate just a day earlier. China is the US's main export market for soybean, making up 60 percent of products bound for overseas markets -- but American imports make up just a third of China's inbound soybean.

Global trade in vegetable oil exceeds 80 million tons, Yu said, adding that this and sunflower oil can be used to make up for a shortfall in soybean oil, which is used for cooking. Soybean's other main use, as animal feed, can be covered by importing more sunflower seeds, rapeseed, meats and fishmeal from South America, he continued.

Latin American countries have been responsible for a larger share of China's soybean imports in recent years, suggesting the Asian nation had been shifting away from the US even before the two economic titans locked horns. It imported 93.5 million tons of soybean in 2016 and 2017, with Brazil supplying 48.5 percent -- 1.7 points more than three years earlier. The US made up 39.4 percent, down a whole point from the same benchmark.

Buyers have the right to choose their suppliers, and will opt for ones in soybean-producing countries that have good trade relations, stable policy expectations and lower import duties, a representative from the firm said.