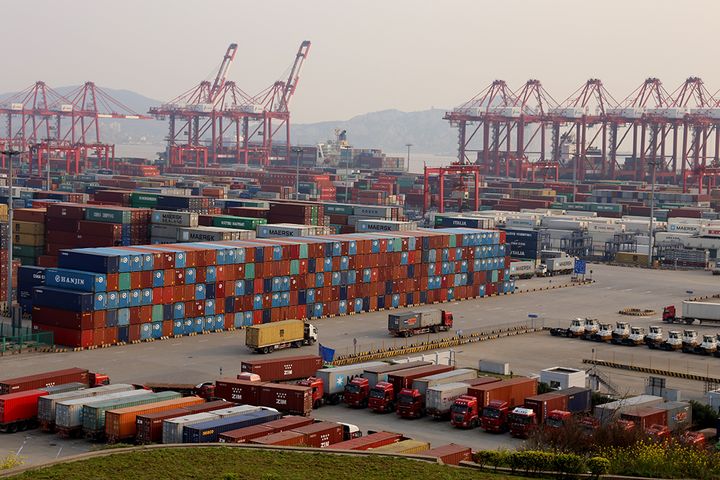 In US dollar terms, China's imports grew 17.2 percent annually to USD1. 54 billion in June, up from 14.8 percent rate last month, while exports were up 11.3 percent to USD196.6 billion, up 8.7 percent from May, China's General Administration of Customs said in a press briefing yesterday. Trade surplus reached USD42,765 million, down 11.1 percent year on year but higher than USD40.81 billion in May. All three figures confounded economists' expectations.

Economists had forecast a USD42.53 billion trade surplus in June and an annual increase of 8.78 percent and 13.79 percent in exports and imports, respectively, per a monthly survey of chief economists by Yicai Global in June.

China's leading export index came in at 41.5 in June, up 0.4 from last month, marking the eighth consecutive month of increases.

Improving external demand has led to an increase in export volume and contributed greatly to growth in the total value of exports, said Huang Songping, spokesman of the General Administration of Customs.

The World Bank in its latest Global Economic Prospects projects the world economy to grow by 2.7 percent this year, up from 2.4 percent last year.

The International Monetary Fund has also raised its forecast for global economic growth for this year from estimates released earlier this year. The continued recovery in the global economy and the improvements in overseas demand have helped boost China's export growth.

The domestic economy is stable and improving, leading to a sustained increase in imports, Huang added. The Chinese economy continued to stabilize and move in a positive direction in the first half of this year. China's official manufacturing PMI stood at 51.7 in June, marking the 11th consecutive month that the index has been above 50, a level that indicates growth. Improvements in the domestic economy have led to an increase in import demand.